With Pride and Commitment

(Caption of photo above) As sea soldiers responsible for the naval base's seaward defence, 3SG Haja and his team's responsibility is to safeguard the base from any threats and ensure that the base’s security is upheld at all times.

LTC Tony Tan, Commanding Officer of Tuas Defence Squadron, praised 3SG Haja and his team for their dedication to their duty, and for always striving to stay competent and sharp.

"We all play a part in ensuring the base security so that our ships can sail out smoothly and carry out their operations." (3SG Haja Shareef Mohamed Suhail, one of the Team Leaders from Tuas Defence Squadron)

For 3SG Haja and his team, being Frontline 24/7 is not just their formation motto, it is their mission that they take seriously. The team proved that last week.

Just when they were preparing to handover to the next team, they were informed of a vessel that was entering the base, and hence the need for screening operations. Instead of taking the easy choice and activating the incoming team to scramble, 3SG Haja and his team went above and beyond their watch timing to finish the screening and handover smoothly to the next team.

BZ to 3SG Haja and team for their commitment to uncompromising excellence! 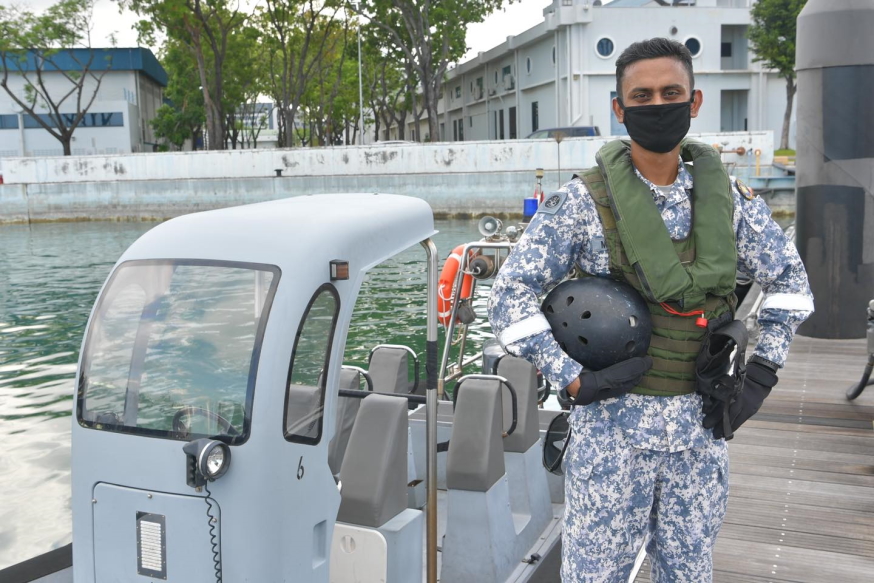 "To me, being 'Frontline 24/7' means that my team and I must always be prepared to respond to any threats when called upon. Even though it is the fasting month, it is still my duty to respond when called up, and to do my best. I am also glad for the support and care from my commanders and team mates." (3SG Haja)