In February 1994, two Victory-class missile corvettes – RSS Victory and RSS Valour from the Republic of Singapore Navy (RSN) sailed westwards to the Andaman Sea for the inaugural Exercise Lion King with the Indian Navy (IN). 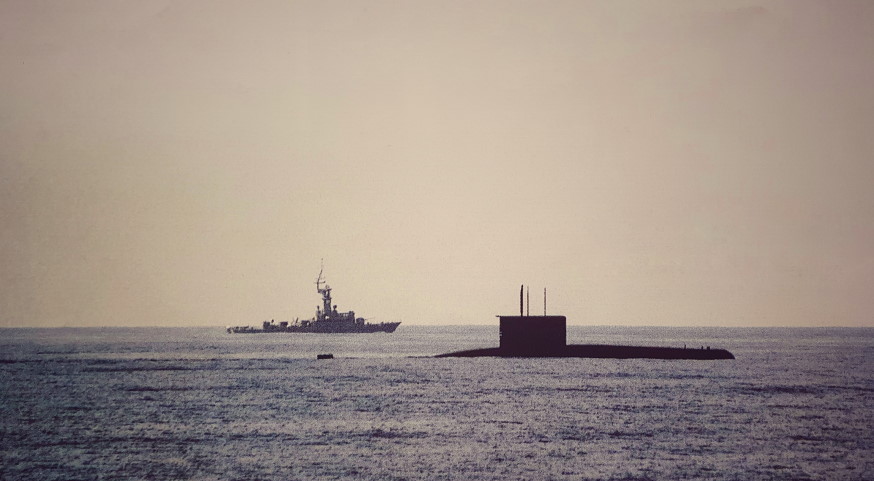 Our Victory-class missile corvette (left) with the Type 209 submarine INS Shankul during the anti-submarine warfare exercise in 1997.

Over the years, the two navies would meet annually and build on mutual trust and understanding whilst executing basic anti-submarine serials out at sea. These exercises took place in the waters off Kochi, Visakhapatnam, and Port Blair. 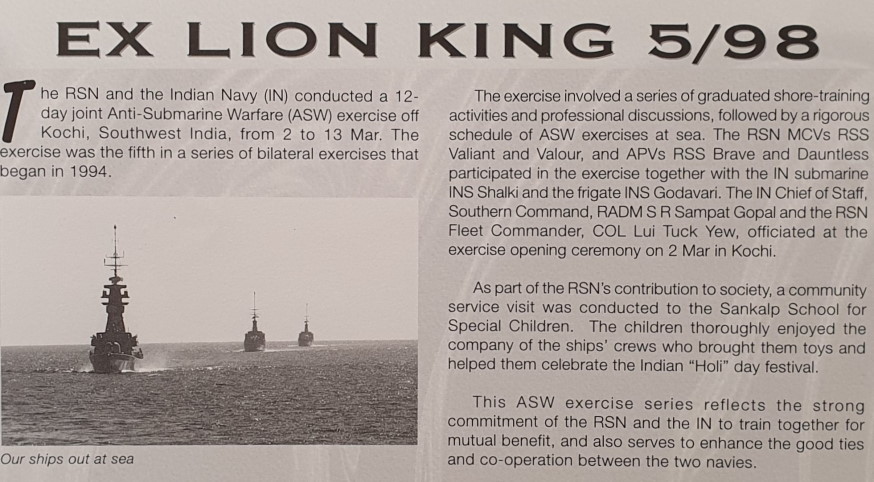 Blast from the past: an archived article on Exercise Lion King.

The exercise between the two navies reached new heights during the 10th anniversary of Exercise Lion King in 2003. RSS Valiant made history by being the first RSN ship to fire an exercise torpedo against a moving target simulated by the IN's submarine, INS Vela. It was also the first successful firing by a Southeast Asian navy. 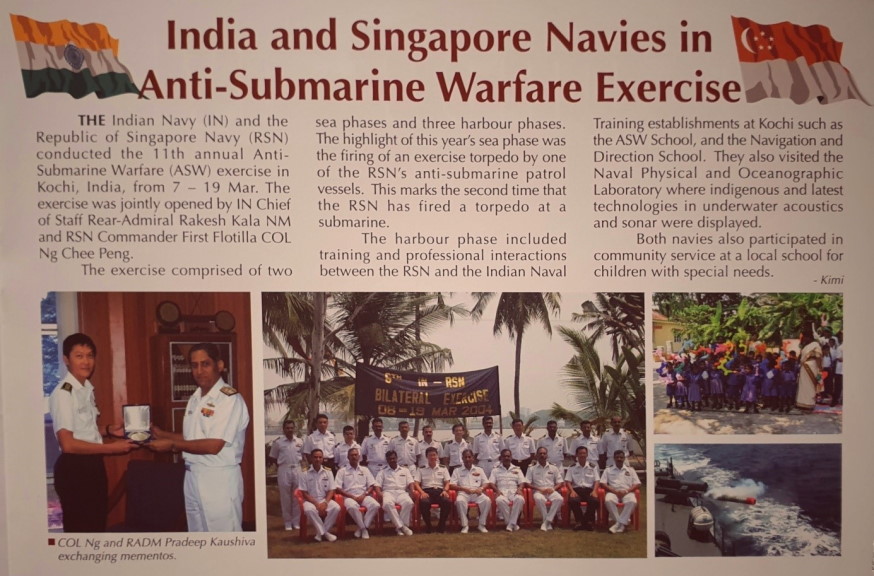 In 2004, the RSN fired a torpedo at a submarine for the second time at the bilateral exercise with the IN.

Exercise Lion King was renamed to be Singapore – India Maritime Bilateral Exercise, or SIMBEX, in 2005 when both navies conducted the annual bilateral exercise in the South China Sea for the first time.

2005 saw many 'firsts' for SIMBEX. It was the first time when the RSN participated with its Challenger-class submarine. The exercise also expanded to include both anti-surface and anti-air warfare serials, and resulted in the deployment of a Fokker-50 Maritime Patrol Aircraft and fighter aircraft from the Republic of Singapore Air Force (RSAF).

The two navies quickly built on this new development and signed revised Standard Operating Procedures for anti-surface and anti-air warfare in 2006. From that point on, the two navies never looked back. Each SIMBEX iteration continued to expand and evolve in scale and complexity.

In the years that followed, both navies continued to sharpen competencies and build interoperability through multi-dimensional warfare serials, live gunnery firings, mission-oriented exercises, and even maritime security serials.

“ Not only has the exercise enhanced the interoperability between both navies, it has also deepened the mutual understanding and strengthened friendship between us. ” In 2018, both navies celebrated SIMBEX's Silver Jubilee in the Andaman Sea and Bay of Bengal. This iteration saw about 30 participating assets from both the RSN and IN, the largest number since 1994. Apart from combined Barak surface-to-air missile firings, it was also the first time where the RSN conducted an Aster surface-to-air missile firing as well as a heavyweight torpedo firing during SIMBEX. The next edition of SIMBEX will be conducted later this month. Although the RSN and IN will not be able to meet up face-to-face for exercise planning, we will leverage the strong trust and mutual understanding built over the years to coordinate via virtual means.

Wishing all participants a successful SIMBEX this year – Onwards & Upwards!