“ It is with artillery that war is made. ”

Up until a few decades ago, firepower was all that mattered on the battlefield. But in an increasingly volatile world, countries and their military forces now have to stay on top of ever-evolving threats with more than just big guns.

For the Republic of Singapore Navy (RSN), this means becoming smarter in our everyday operations and developing the ability to perform a wider range of missions in both periods of peace and tension — all within Singapore’s unique maritime landscape, where busy sea lanes of communication and a congested strait make policing our waters an extremely challenging affair.

With these concerns in mind, the RSN detailed a replacement for its fleet of 11 patrol vessels. The original 40-page briefing document was straightforward enough: the new ships must be more versatile than their predecessors and be able to tackle missions in crowded waters with ease. And tapping on technological advancements, each ship should accomplish its objectives with fewer crew members.

There was just one issue though: making it a reality.

Up for the Task

Senior Lieutenant Colonel (SLTC) Chew Chun-Chau lives and breathes the Navy. Enlisted as a recruit in 1996, he rose through the ranks and fulfilled both ship and shore leadership roles, including in the Naval Operations Department as the Section Head of Operations Planning. “My tour of duty has given me experience in almost every aspect of naval operations,” he says.

In 2009, he was the Commanding Officer of the patrol vessel RSS Independence  when the Navy announced its plan to build a new fleet of ships that would replace the Fearless -class patrol vessels. Also needed: a project manager to spearhead the effort.

SLTC Chew jumped at the opportunity. “I felt this was the chance of a lifetime, so I put my name into the hat.”

In January 2010, he found himself in the same room with the brightest minds in defence technology and naval engineering. Given the task of leading the project for the new patrol vessels, SLTC Chew knew he had to come up with the design for a versatile ship based on the RSN’s requirements.

Initially, the possibilities were mind-boggling. Components such as surveillance, weapons, propulsion and hull form meant thousands of possible configurations. SLTC Chew and his team knew that they would waste precious time going in circles if they did not first arrive at a clear design concept.

To do so, they needed to get out of their comfort zone: SLTC Chew and his team drew inspiration from outside the military. For research, they visited dimly lit wards in local hospitals, furiously taking notes as they watched medical staff on their night shifts. “It’s amazing how so few staff can manage so many patients,” SLTC Chew marvels.

The following day, he would be back aboard a ship — again, not necessarily one in the RSN. Commercial oil tankers and container vessels served as classrooms for the team to learn how best to implement operating procedures aboard the new vessels and how manpower could be better optimised.

“Commercial ships are driven by profit, so they need to operate effectively with minimal crew,” he says. “What better than to learn from them?” 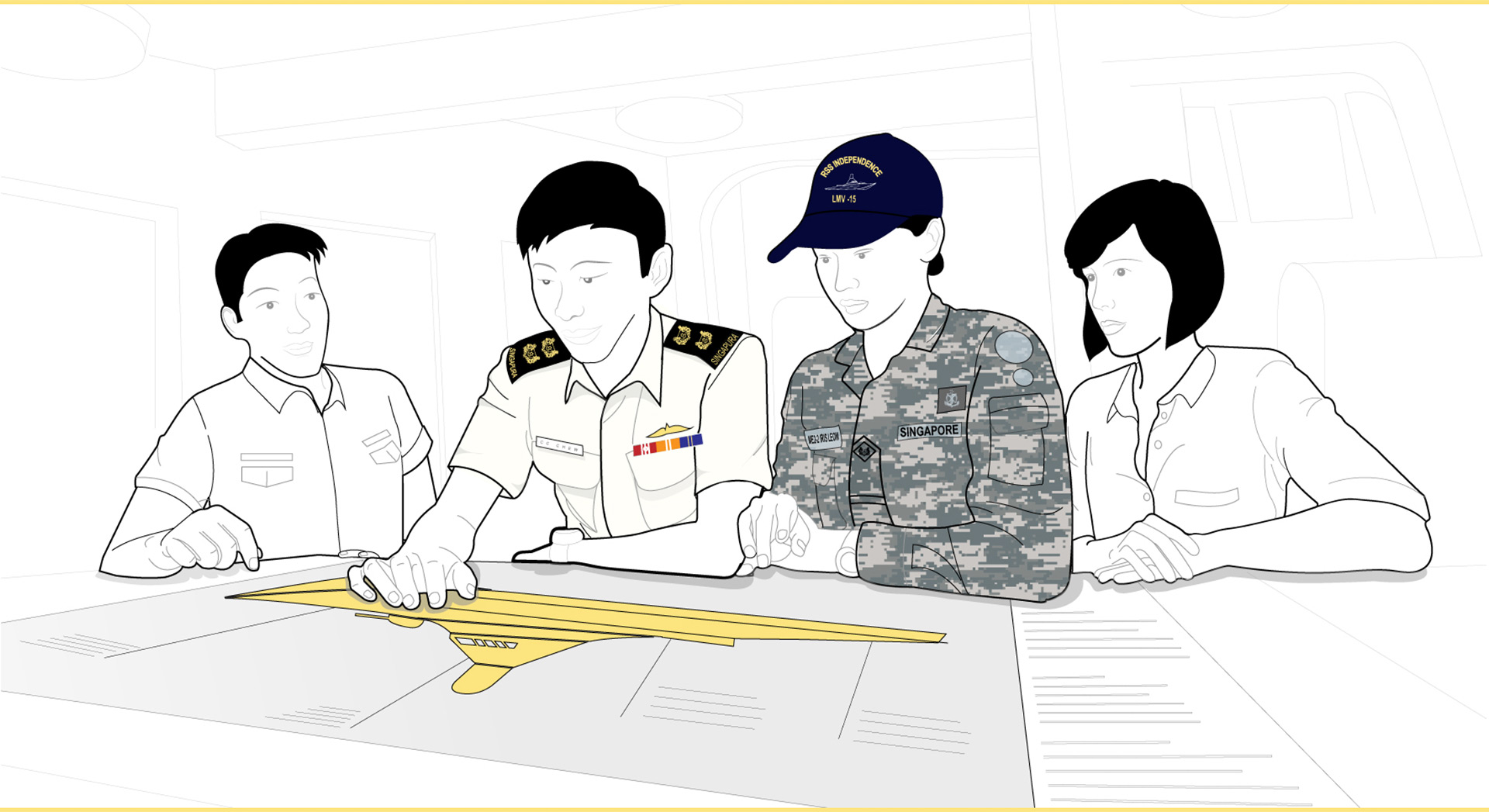 Nine gruelling months of field studies yielded mountains of paperwork and an avalanche of insights. Translating these into a cohesive concept for the new vessel would take the team at least a few more months.

Attempting to take his mind off the project one weekend, SLTC Chew was looking for entertainment on YouTube when he chanced upon a video of the late Steve Jobs — then the CEO of Apple — introducing to the world the first-ever iPad.

He soon realised that there was nothing new about the device. “Every feature it carries, such as Wi-Fi, already exists. But together the features excelled on the iPad because it was such a great portable platform,” SLTC Chew recalls.

And that was his eureka moment. “Our new ship needed to let us add or subtract different functionalities according to our needs and still be nimble enough.”

SLTC Chew calls this mission modularity. “In some scenarios, the new ship would operate as a patrol vessel. But when required, we would be able to convert it to a missile corvette, and so on. Like a Swiss Army knife.”

Like the iPad, the new ship would also be ‘upgradeable’. “Some of the technology we wanted for the ship was not available at the time, so we wanted the entire ship to act like a USB dock and be able to insert new hardware and software throughout its life cycle.”

All of these — atop a hull that would measure just 80 metres long and 12 across. The size, when coupled with a 360-degree bridge, would enable the crew aboard the new ship to keep a hawk’s eye on its surroundings while weaving through the confined Singapore Strait with ease.

From the 12th floor of the Defence Technology Tower A, SLTC Chew felt as if he had entered a new dimension. Encircled by a panorama of illuminated screens that mimics the 360-degree view from within the new ship’s Integrated Command Centre (ICC), crew members from the Fearless-class patrol vessels began “steering” the new craft on a Systems of Systems Integration Laboratory (SoSIL) created by the Defence Science and Technology Agency (DSTA).

The months following SLTC Chew’s light-bulb moment saw progress at breakneck speed. As contractors across the globe offered their ideas and proposals for systems on the new ship, the critical task of assessing how well these systems would work together fell to the SoSIL.

Inside the SoSIL, the crew faced realistic simulations such as hostile small craft scenarios in congested waters and warfare operations further afield. Throughout, they had no problems sighting threats — validating the 360-degree design of the ICC.

Away from the futuristic gadgetry, the crew practised operating the new ship with control panel mock-ups made out of nothing but solid wood. The objective for this, according to SLTC Chew, was to assess human interaction with “every single button on the new ship”.

Drawing on earlier field studies, the team also spent months developing operating procedures from the bottom up. To do this, SLTC Chew sought the expertise of senior personnel within the Navy, some of whom would later become instructors for future crew aboard the new vessels.

As blueprints and processes took shape, so did the name: Littoral Mission Vessel (LMV). “Littoral refers to the ship’s main area of operation, which is close to shore, where we face heavy traffic and navigate small island groups. Mission refers the ship’s ability to perform a full spectrum of missions,” explains SLTC Chew.

All the Right Moves

In 2013, more than two and a half years into the project, the LMV faced crucial tests. Failure would mean a delay in constructing the vessel, something that SLTC Chew and his growing team — by now comprising experts from over 10 countries — were desperate to avoid.

Halfway round the world, a six-metre wooden scale model of the LMV bobbed up and down in the facility’s indoor testing basin. SLTC Chew held his breath as the waves intensified. From the control room, naval engineers at MARIN, the Maritime Research Institute in the Netherlands, began putting the miniature vessel through a series of extreme seakeeping manoeuvres.

Number of designers and contractors involved

Right then, SLTC Chew had a mental picture of standing on the deck of the finished LMV as it cut through rough waves at high speed, weaving through Singapore’s congested waters with quick and sharp turns.

Call it a premonition, but that was exactly what the scale model accomplished that day.

“Seeing the hull model in the water — that was the first time I felt that things were getting real,” grins SLTC Chew. Having made all the right moves in tests and simulations, the LMV was finally ready to be built. What had been merely ideas on paper would, in time, join the ranks of the RSN as a proud new member.

But first, they had to put this modern marvel together.