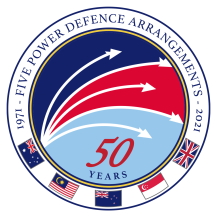 REAFFIRMED their nations' continued commitment to the FPDA, and commended the achievements over the past 50 years, since its founding in 1971. The Ministers applauded the 50th anniversary celebrations which commemorate enduring partnerships within a constructive regional security architecture.

REITERATED the purpose and founding principles of the FPDA: to remain relevant and defensive in nature, and to evolve at a comfortable pace to all. Accompanying these founding principles are the '3Rs' (Remit, Relevance and Reassurance) which guide FPDA's development and future outlook.

EXTENDED their deepest sympathies to the countries, communities and individuals impacted by the COVID-19 pandemic, and noted the effective measures undertaken by FPDA nations and HQIADS in dealing with the pandemic, and ensuring the well-being of their people, economic development as well as regional security and stability.

COMMENDED the successful conduct of Exercises Bersama Gold (October 2021), Suman Warrior (July 2021), and Bersama Shield (April 2021) despite the pandemic. Noting the security challenges that have evolved over the decades, the Ministers expressed commitment to continually enhancing the joint operational value of FPDA exercises for the mutual benefit of all member-nations.

THE MINISTERS DO HEREBY DECLARE TO:

ADOPT the 50th Anniversary Stock-take 2022-2031 which will provide future direction on the FPDA's strategic priorities, organisational processes and structure, and activity plans.

REAFFIRM the observer programme as a key method of fostering transparency.

ACKNOWLEDGE efforts to enhance the professional value of FPDA exercises through the FPDA's Exercise Concept Directive 2021 and Exercise Plan 2022-2031, which emphasize high-end conventional warfighting serials while continuing to build capacity in non-conventional domains such as counter-terrorism, maritime security, Humanitarian Assistance and Disaster Relief, and cybersecurity.

WELCOME the release of the FPDA 50th Anniversary book and video as a way to increase awareness, demonstrate activities and portray FPDA's unity and cohesion over the last 50 years.

THANK the Prime Ministers of Australia, Malaysia, New Zealand, Singapore and the United Kingdom for their congratulatory remarks and strong political reaffirmation for the FPDA's strategic significance, relevance and vision for the future.

DONE on this Twenty-First Day of October in the Year Two Thousand and Twenty-One, in a single original copy in the English language.

Secretary of State for Defence