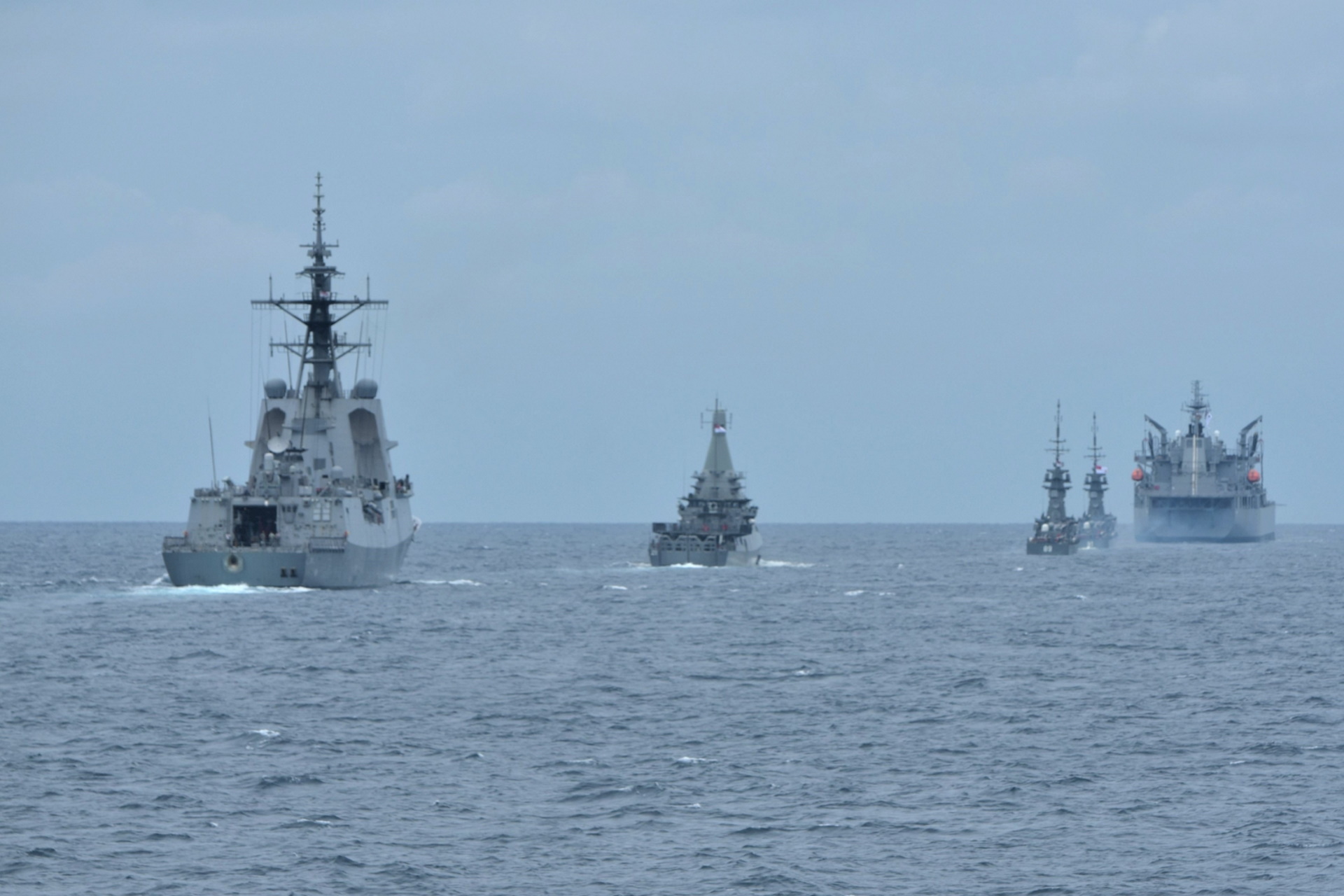 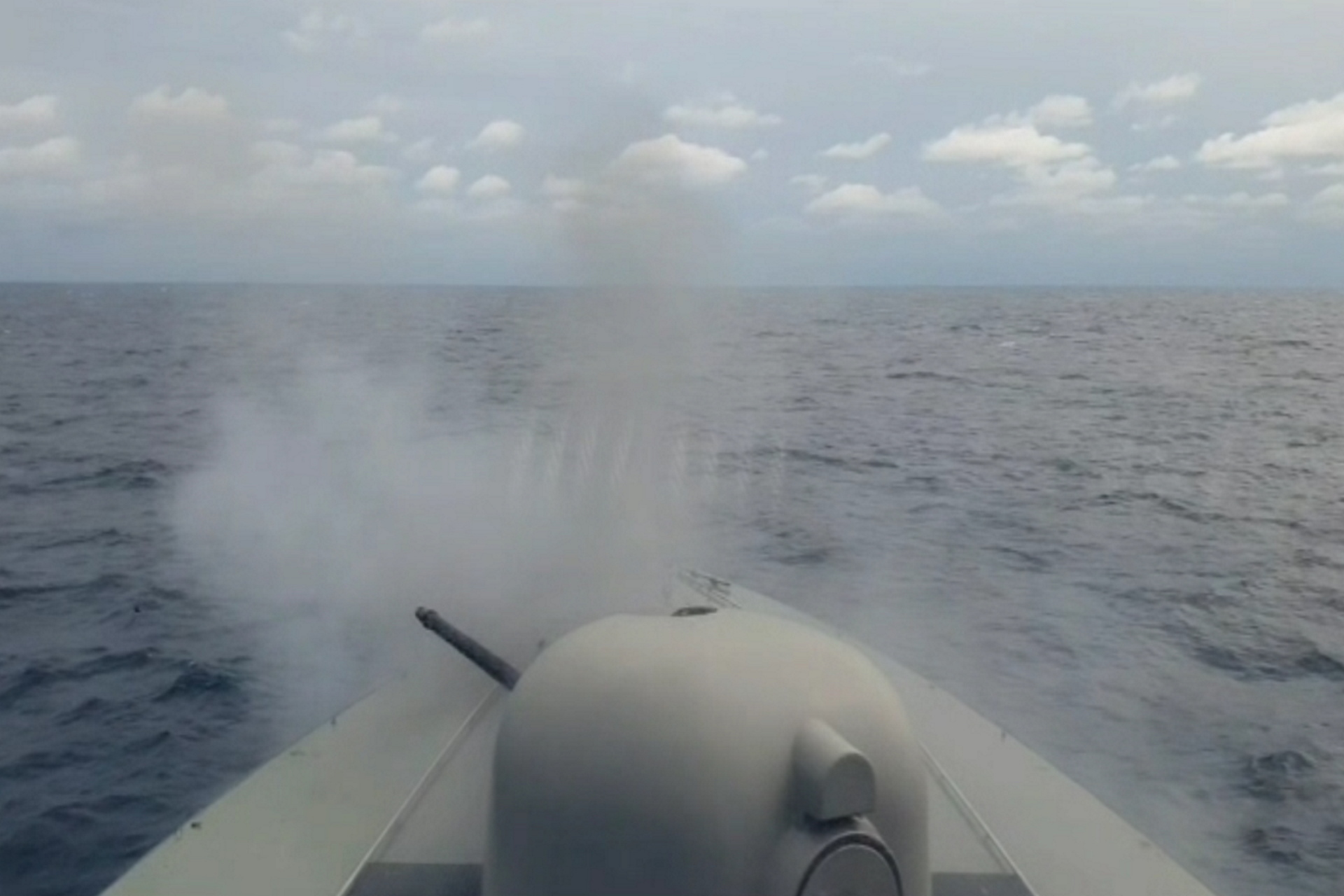 RSS Dauntless conducting a gunnery firing during the exercise. 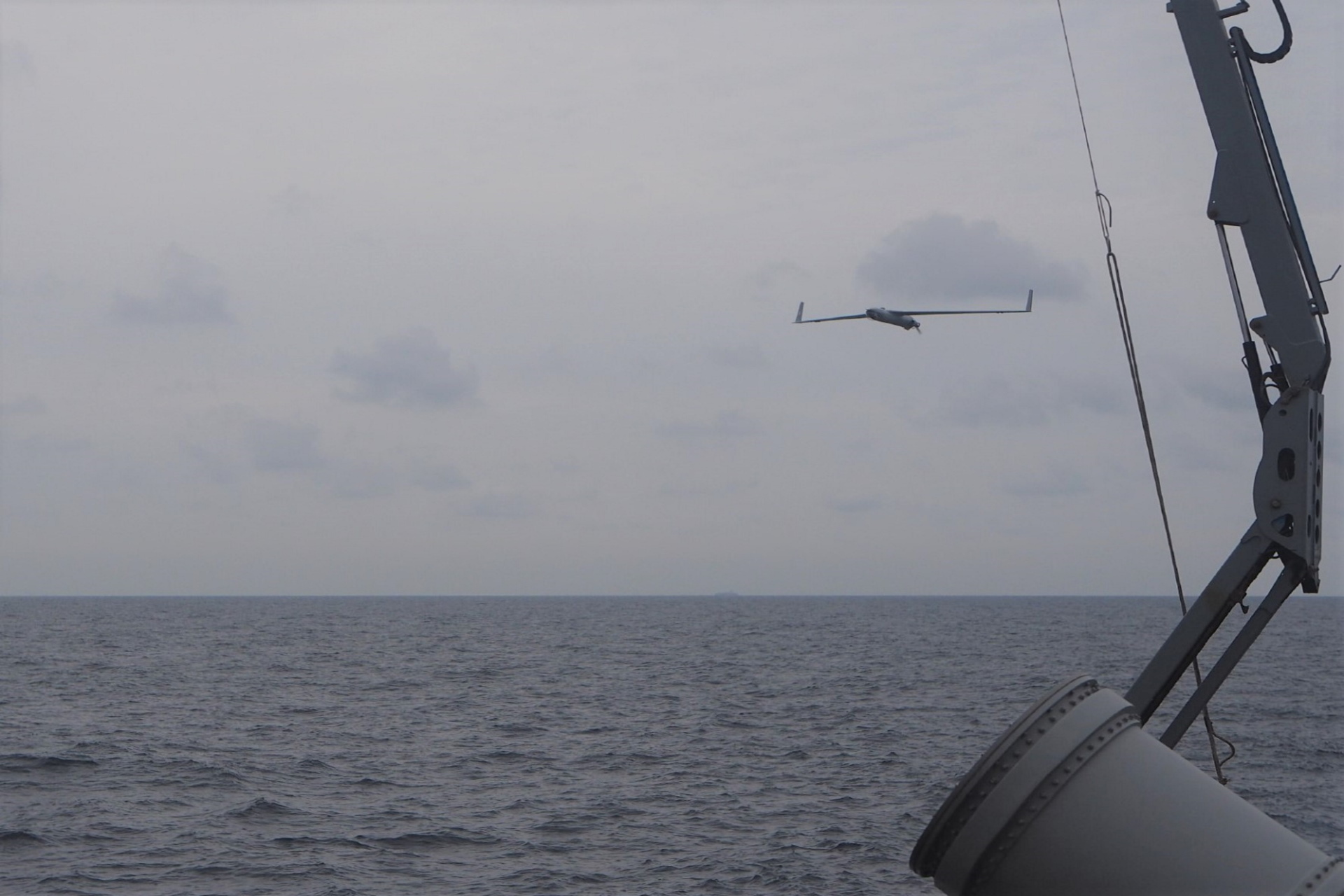 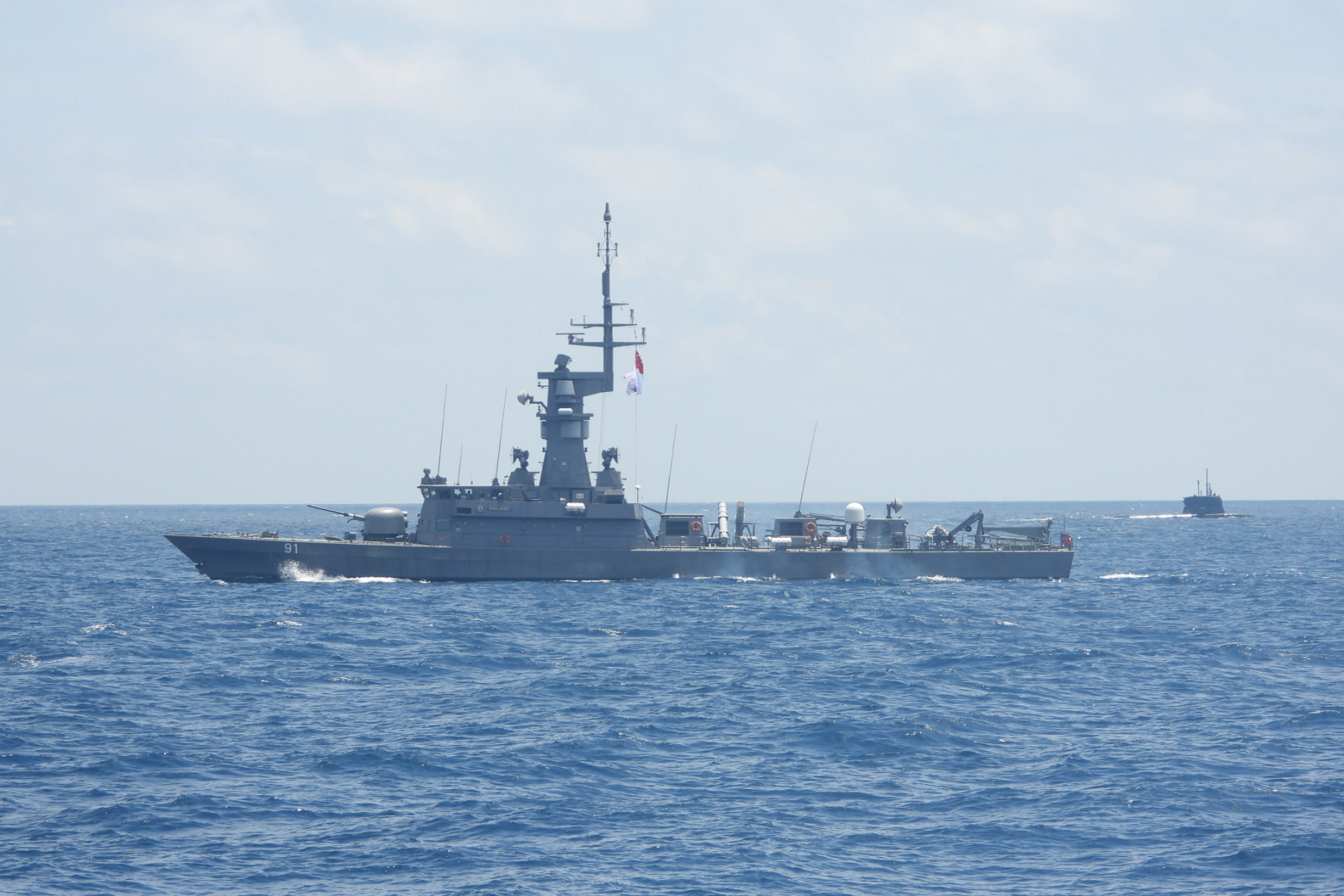 The RSN's submarine (background) and RSS Valiant (foreground) during the exercise. 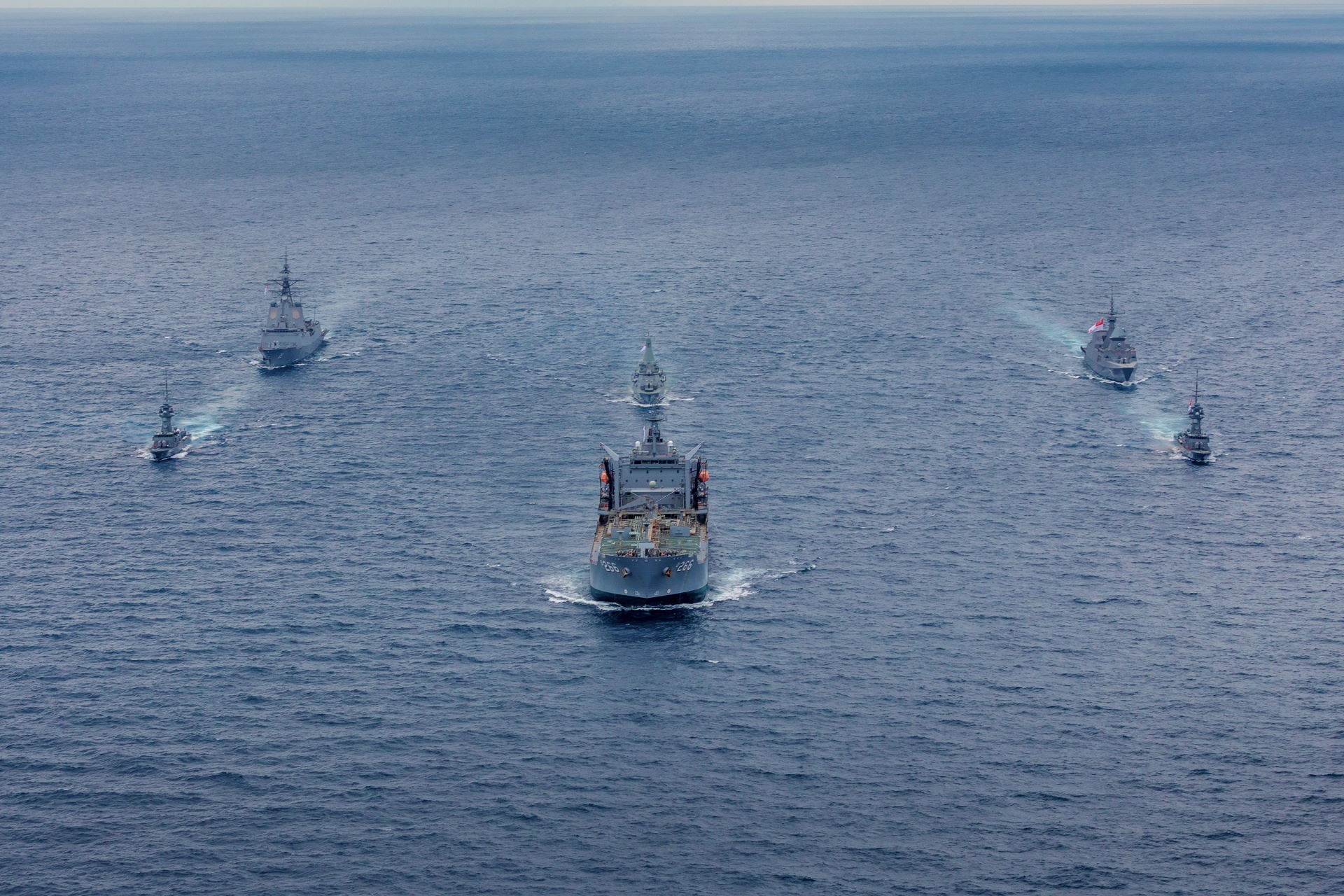 The Republic of Singapore Navy (RSN) and the Royal Australian Navy (RAN) are participating in the bilateral maritime exercise, Exercise Singaroo, from 26 to 28 September 2020. Inaugurated in 1995, this year marks the 25th anniversary of the exercise.

The exercise will be conducted in the southern reaches of the South China Sea, with no physical interactions between the personnel from both navies due to the current COVID-19 situation. The RSN is participating with one Formidable-class frigate RSS Tenacious, one Independence-class Littoral Mission Vessel RSS Dauntless, as well as two Victory-class missile corvettes, RSS Valiant and RSS Valour, both embarked with ScanEagle unmanned aerial vehicles (UAVs), and a submarine. The RAN is deploying one Hobart-class destroyer HMAS Hobart, with an embarked MH-60R helicopter, supported by a replenishment oiler HMAS Sirius. The exercise will also be supported by a Republic of Singapore Air Force Fokker-50 Maritime Patrol Aircraft and two F-16 fighter aircraft. During the exercise, both navies will conduct various serials, including gunnery firing, manoeuvring drills, underway replenishment, air defence exercises, communication exercises and encounter exercises where the UAVs will be deployed to provide surveillance and threat identification.

Highlighting the importance of the exercise in building interoperability between both navies, RSN's Commander 8th Flotilla, Colonel Ho Jee Kien said, "Exercise Singaroo serves as a useful platform for the RSN and the RAN to carry out high-end training across the air, sea and underwater domains. As we mark the 25th anniversary of the exercise this year, we look forward to many more years of close cooperation and friendship between our two navies."

Exercise Singaroo is one of many bilateral military interactions between the Singapore Armed Forces and the Australian Defence Force, underscoring the close and long-standing defence relations between Singapore and Australia. In addition to bilateral and multilateral exercises, both armed forces also interact frequently through high-level visits, regular dialogues, professional exchanges and the cross-attendance of courses.