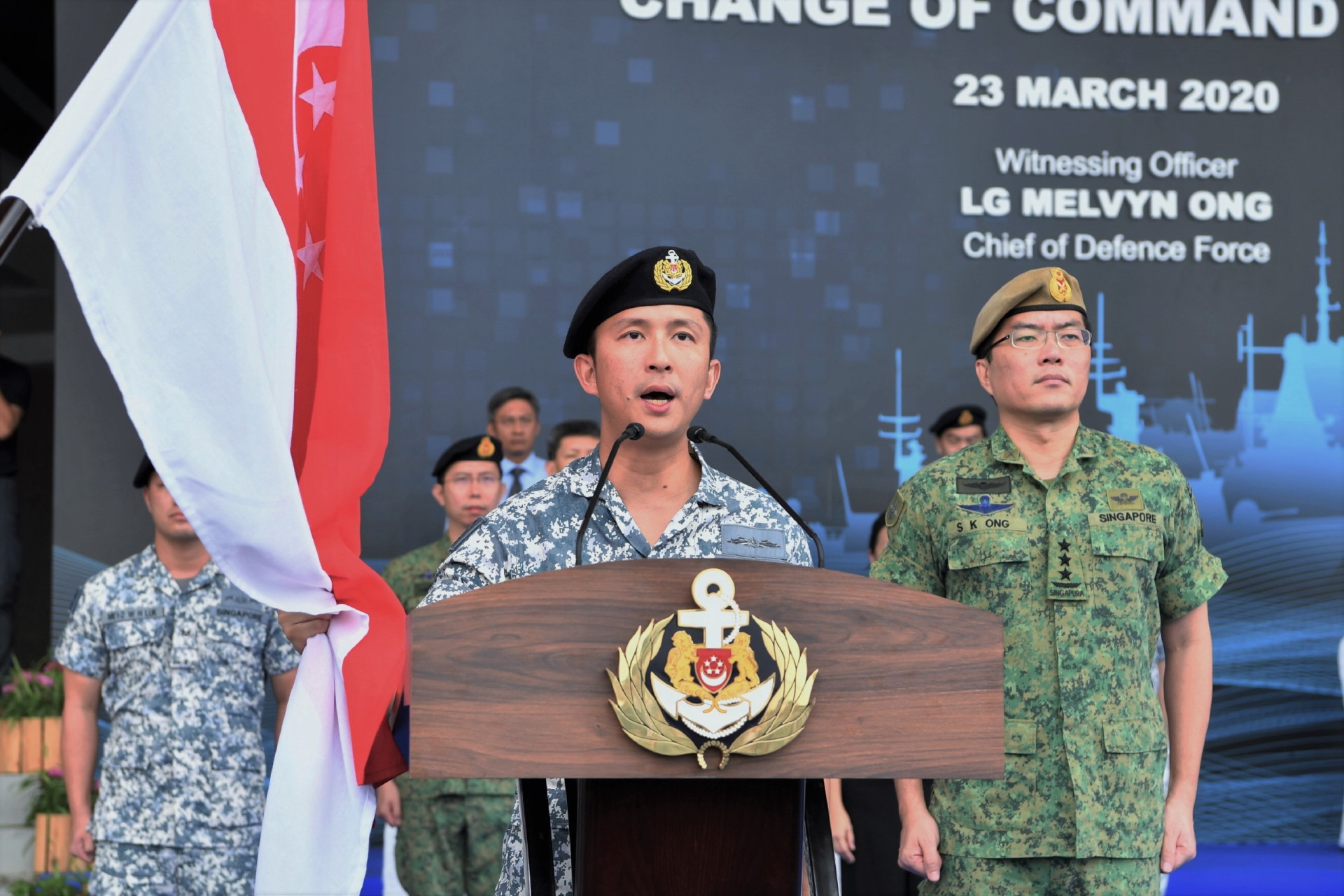 The new Chief of Navy, RADM Beng, taking his oath in the presence of Chief of Defence Force, Lieutenant-General Melvyn Ong, at the Change of Command Parade this morning.

The Republic of Singapore Navy (RSN) welcomed Rear-Admiral (RADM) Aaron Beng as its new Chief of Navy (CNV) at a Change of Command Parade held at RSS Singapura - Changi Naval Base this morning. During the parade, RADM Beng took over the Navy's symbol of command from the outgoing CNV, RADM Lew Chuen Hong.

At the parade, RADM Lew reviewed a Guard of Honour contingent against a background of RSN ships and static displays. He also inspected the RSN ships in the base through a sail-past on board the Specialised Marine Craft.

In his farewell speech, RADM Lew thanked the men and women of the Navy Family, for their hard work and sacrifice, as the RSN stands firm as the frontline of defence for Singapore. He said, "Your strength underpins the peace and sovereignty of our tiny city state. Your eternal vigilance guarantees our access to the sea - the sea that carries the food we need for our survival, the fuel that produces our water, and underpins the economic success of our maritime nation."

The new CNV, RADM Beng, 38, joined the SAF in 2000 and was awarded the President's Scholarship as well as the SAF Overseas Scholarship. During the course of his military career, RADM Beng has held, amongst others, the appointments of Commanding Officer of the Frigate RSS Intrepid, Commanding Officer of the Frigate Squadron, Director of the Defence Policy Office, Fleet Commander, and Chief of Staff - Naval Staff.

The outgoing CNV, RADM Lew, 43, has held the post of Chief of Navy since 16 June 2017, and has served the Singapore Armed Forces (SAF) with distinction since 1995. Under his leadership, the RSN continues to safeguard Singapore's sovereignty 24/7. He led the inter-agency Crisis Management Group that deals with maritime security risks such as terrorist threats, and oversaw maritime security operations during the DPRK-US Singapore Summit and the 2018 ASEAN Summit. RADM Lew also drove organisational changes and capability development to strengthen the RSN's operational readiness. These include the construction of the four Invincible-class submarines and the commissioning of all eight Independence-class Littoral Mission Vessels. He also initiated the Multi-Role Combat Vessel project to replace the Victory-class Missile Corvette. During RADM Lew's tenure, the RSN furthered Singapore's defence space as well, through co-organising the inaugural ASEAN-China Maritime Exercise and contributing towards the inaugural ASEAN-US Maritime Exercise; and, as co-chairman of the ASEAN Defence Ministers' Meeting (ADMM)-Plus Experts' Working Group on Maritime Security, led the adoption of the Code for Unplanned Encounters at Sea (CUES) by all 18 ADMM-Plus nations.

This change is part of the continuing process of leadership renewal in the SAF. The parade was witnessed by the Chief of Defence Force Lieutenant-General Melvyn Ong, and attended by senior officials from MINDEF and the SAF, as well as servicemen and women from the RSN.

In light of the Coronavirus Disease 2019 situation, the parade proceeded with enhanced precautionary measures, which included a reduction in the number of invited guests. All guests were required to undergo temperature screening and declare their travel history, and were seated at least one metre apart.

Speech by Chief of Navy, Radm Lew Chuen Hong, at the Chief of Navy Change of Command Parade, at Rss Singapura - Changi Naval Base