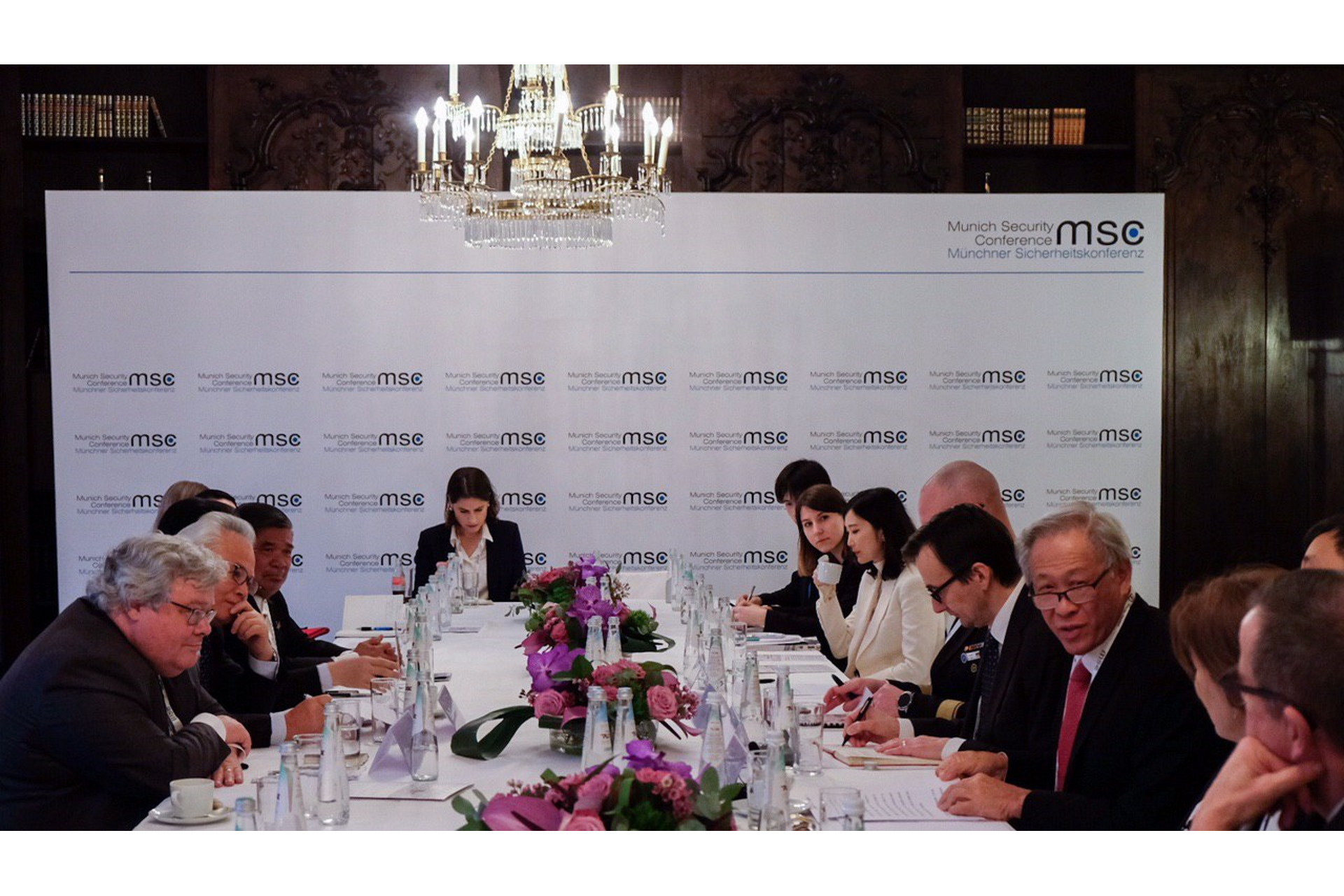 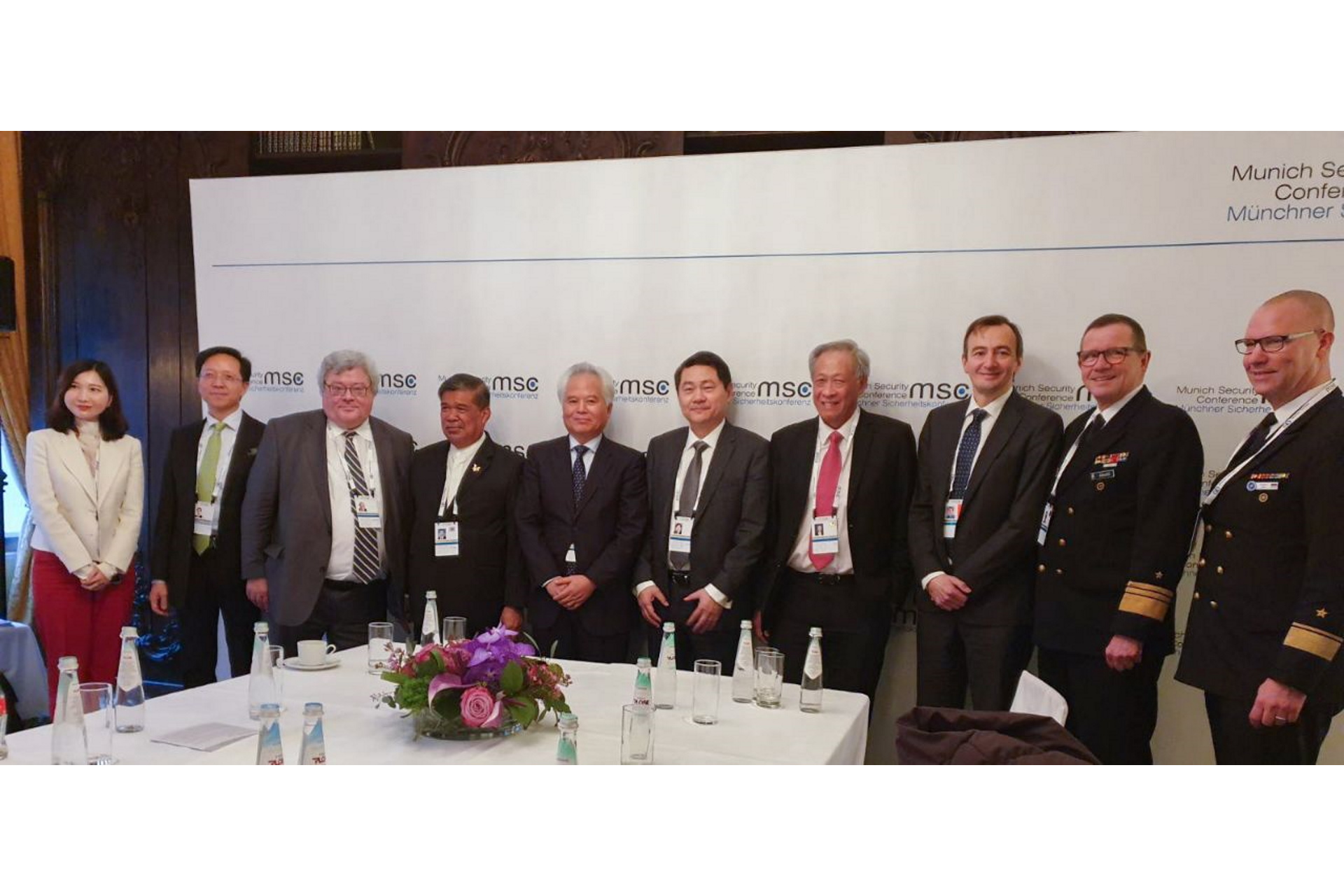 Dr Ng (fourth from the right) with participants of the Maritime Security Roundtable at the MSC. 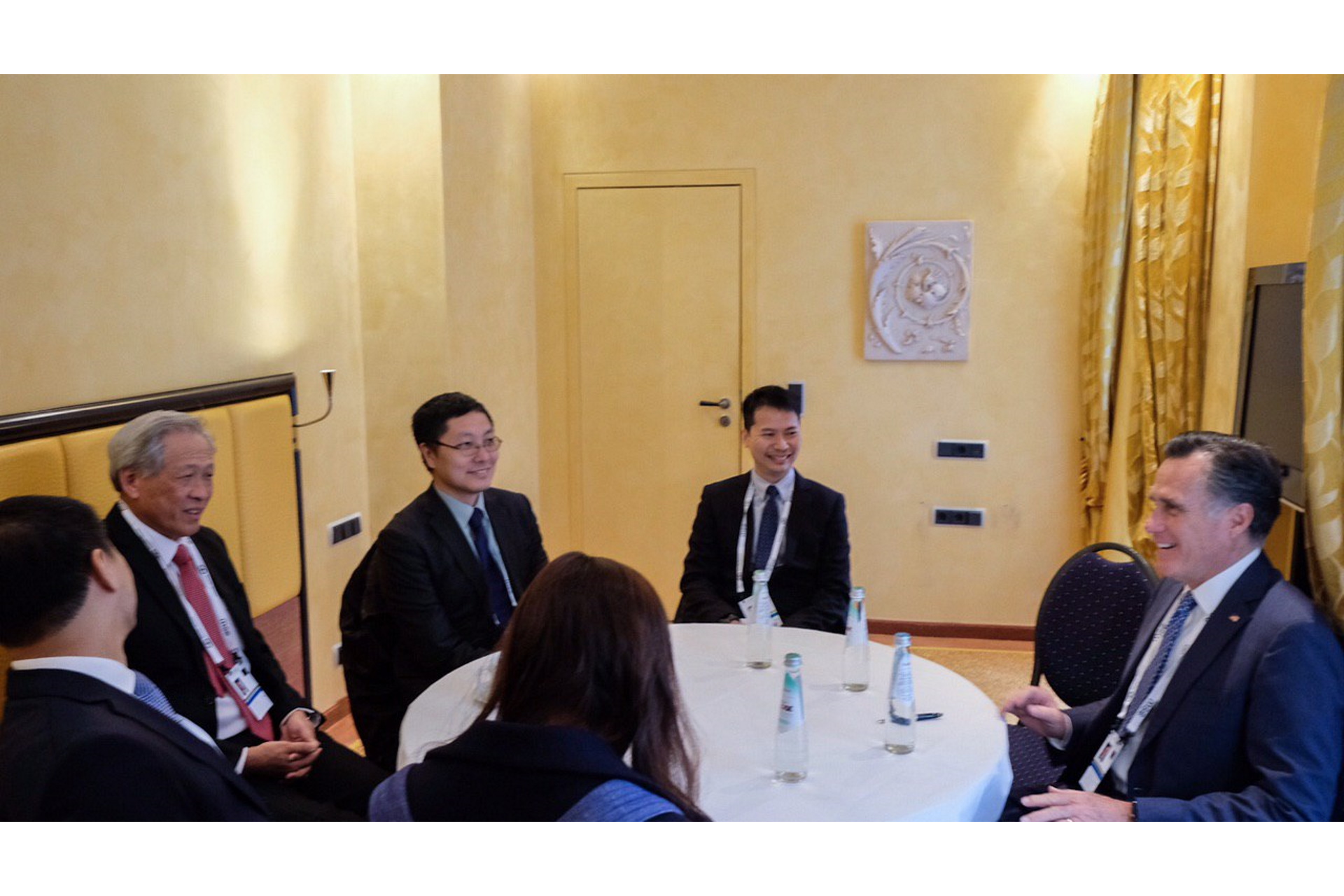 Dr Ng (in red tie) having a bilateral call with United States Senator Mitt Romney on the sidelines of the MSC. 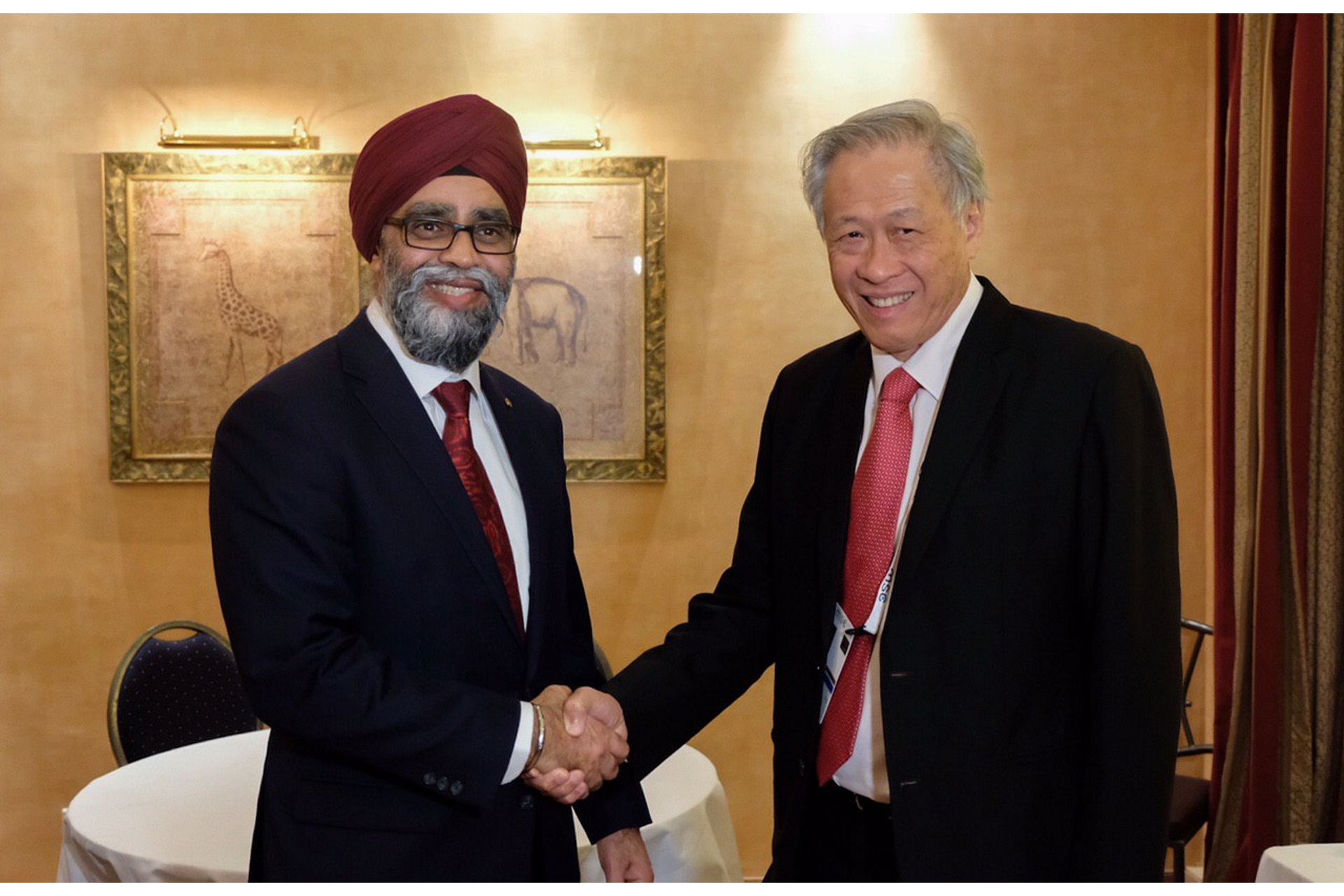 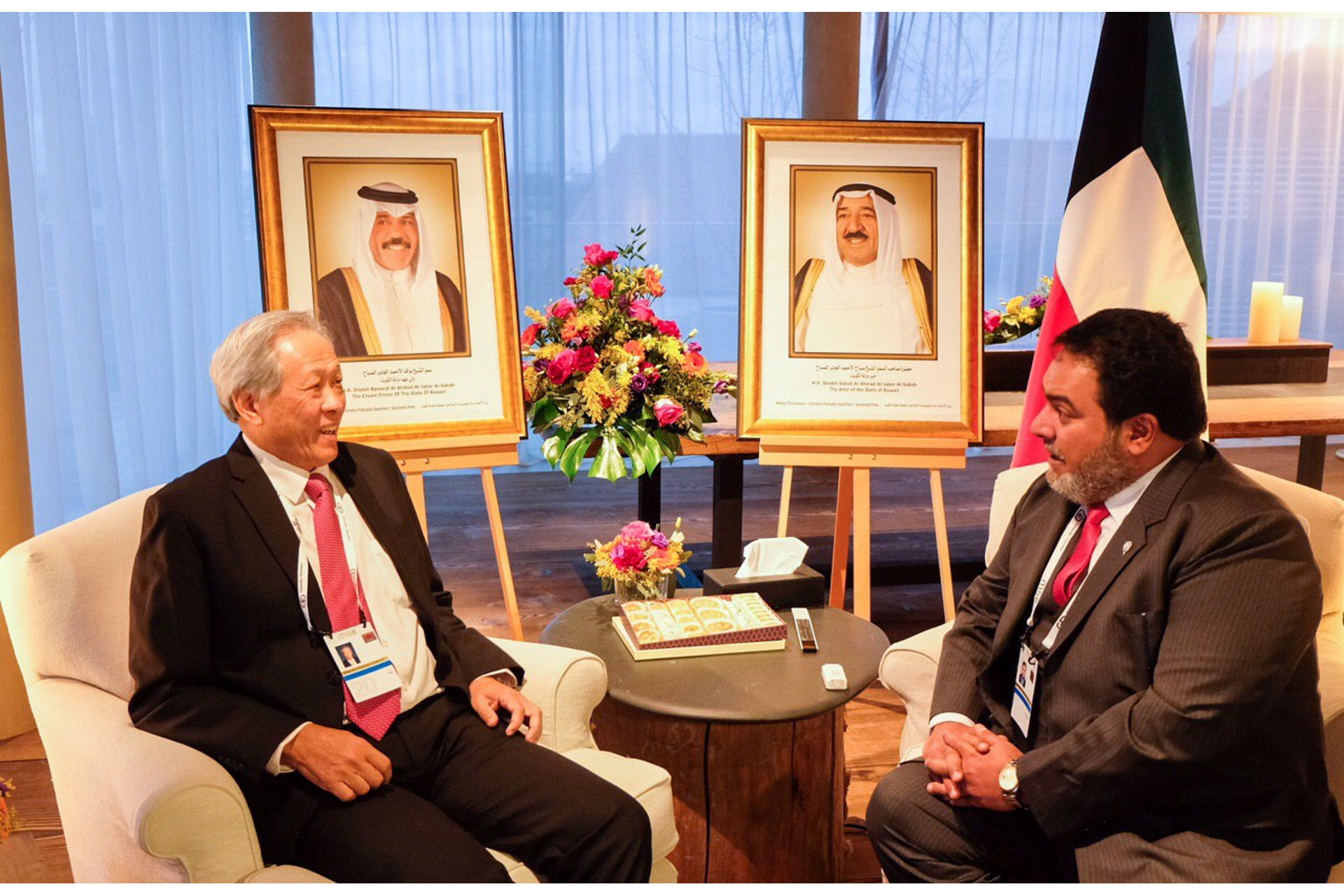 Dr Ng (left) met President of the Kuwait National Security Bureau on the sidelines of the MSC.

Minister for Defence Dr Ng Eng Hen is in Germany from 14 to 17 February 20201 to attend the 56th Munich Security Conference (MSC). The MSC is an annual high-level security conference that brings together heads of government, defence and foreign ministers, parliamentarians, military leaders, and security experts from around the world. Held from 14 to 17 February 2020, this year's MSC covers a wide range of security issues. These include geopolitical and security developments in Europe, Africa and the Middle East, and other security issues pertaining to defence cooperation, international trade and climate security.

In his speech, Dr Ng highlighted the importance of upholding the principles of freedom of navigation despite conflicting and overlapping claims in the South China Sea. He also proposed, as a practical solution, for countries to explore resource-sharing mechanisms to reduce risk of conflict in the region and promote mutual benefits.

Dr Ng also said defence establishments could support such diplomatic efforts through building trust and confidence, and facilitating a conducive environment to find solutions. To this end, Dr Ng said that Singapore had worked under the ambit of ASEAN to promote practical cooperation and confidence building measures to reduce risk of miscalculations. He added, "Our defence establishments within ASEAN have worked on areas in which we facilitated de-escalation and common understanding, and we practice CUES, for example, Code for Unplanned Encounters at Sea. In 2018, we also co-organised the ASEAN-China Maritime Exercise, and facilitated the ADMM's agreement to conduct the ASEAN-US Maritime Exercise in 2019."

Dr Ng also met US Senator Mitt Romney on the sidelines of the MSC yesterday. Both sides reaffirmed the excellent and long-standing bilateral defence relationship and strategic partnership between Singapore and the US, marked by the renewal of the 1990 Memorandum of Understanding Regarding US Use of Facilities in Singapore in September 2019, and the signing of the Memorandum of Understanding concerning the establishment of a Republic Singapore Air Force Fighter Training Detachment in Andersen Air Force Base, Guam in December 2019. Both sides also discussed political and security developments in the Asia-Pacific and the US.

Early this morning, Dr Ng met Canadian Minister of National Defence Harjit Singh Sajjan. Both sides reaffirmed the friendly and growing defence relations between Singapore and Canada, and exchanged views on the political and security developments in the Asia-Pacific. Dr Ng also expressed appreciation for Canada's support for the RSAF's and Army's training in Canada.

Dr Ng also met President of the Kuwait National Security Bureau Sheikh Thamer Ali Sabah Al Salem Al Sabah, where both sides reaffirmed the warm and friendly bilateral defence relationship. Dr Ng expressed appreciation for Kuwait's support for the SAF's deployments to the Middle East as part of the multinational coalition to defeat the Islamic State in Iraq and Syria. Both sides also spoke about geopolitical developments in the Middle East.

[1] All dates indicated in the News Release are in Singapore time.