"Together We Keep Singapore Strong"

With the introduction of Digital Defence, a Total Defence Logo Design Competition was held from July to September 2019 in search of a new Total Defence logo to represent all six pillars of Total Defence: Military, Civil, Economic, Social, Digital, and Psychological Defence. Over 30,000 members of the public voted for their favourite design out of 10 shortlisted ones from November to December 2019. This is the first time the Total Defence logo is revamped since its introduction 35 years ago.

The six arrows in the logo represent the six pillars of Total Defence. The tight triangle formation of six arrows pointing in the same upward direction signifies Singaporeans working together to achieve the common objective of safeguarding Singapore's security and way of life. It also reflects Singaporeans' resilience and determination to keep progressing together in an ever-changing world.

The crescent moon and five stars, and the colours of red and white, are elements from the National Flag. Red stands for universal brotherhood and equality of man. White symbolises pervading and everlasting purity and virtue. The crescent moon represents a young nation on the ascendant, and the five stars depict Singapore's ideals of democracy, peace, progress, justice and equality.

Taken as a whole, the logo symbolises all Singaporeans playing their part in Total Defence to safeguard our future.

Ms Samantha Alexa Teng Si Min, 31 years old, is an Allied Educator at Queensway Secondary School. Encouraged by her friend, Samantha joined the competition given her interest in designing.

Samantha drew inspiration from the previous Total Defence logo. She designed her logo with the arrows pointing upwards to signify Singapore's continuous journey to stay resilient against current and future threats.

The first Total Defence logo, in the familiar shape of a hand, was the winning entry of a competition organised by the Ministry of Defence back in 1985. The guidelines were to design a logo that would depict the first Total Defence theme, "There's a part for everyone". After a public voting from more than 20,000 members of the public, freelance graphic designer Mr Berwin See won the competition.

The beginnings of Total Defence

Borrowed and adapted from Sweden and Switzerland, the concept of Total Defence was first introduced in 1984 as "the national defence concept" that rallies all Singaporeans behind the Singapore Armed Forces (SAF) should we face a military threat in a conventional war scenario. Total Defence was also envisioned to build up in peacetime the people's determination to stand up for Singapore under all circumstances, with Psychological Defence as its core.

With the ongoing threat of terrorism and more recently, threats in the digital domain, Total Defence has been contextualised to address new challenges. From SARS in 2003 to the Financial Crisis in 2008 and the continued threat of terrorism, Total Defence has rallied Singaporeans together to overcome any challenges that come our way. In 2019, a sixth pillar of Digital Defence was introduced to respond to threats from the digital domain such as fake news, cyberattacks and online scams. Even as Total Defence adapt over the years to reflect evolving security threats and challenges, its core message remains the same - that every Singaporean has a part to play in safeguarding Singapore.

The posters reflect the evolving themes of Total Defence since 1984, from rallying behind the SAF to addressing threats like terrorism and encouraging Singaporeans to put Total Defence into action in their daily lives. "Together We Keep Singapore Strong" has been the theme of the Total Defence campaign since 2016. 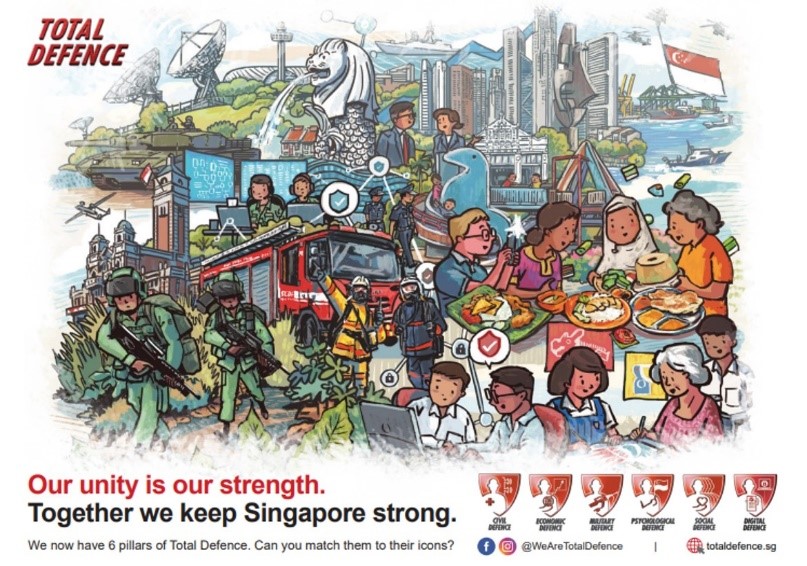