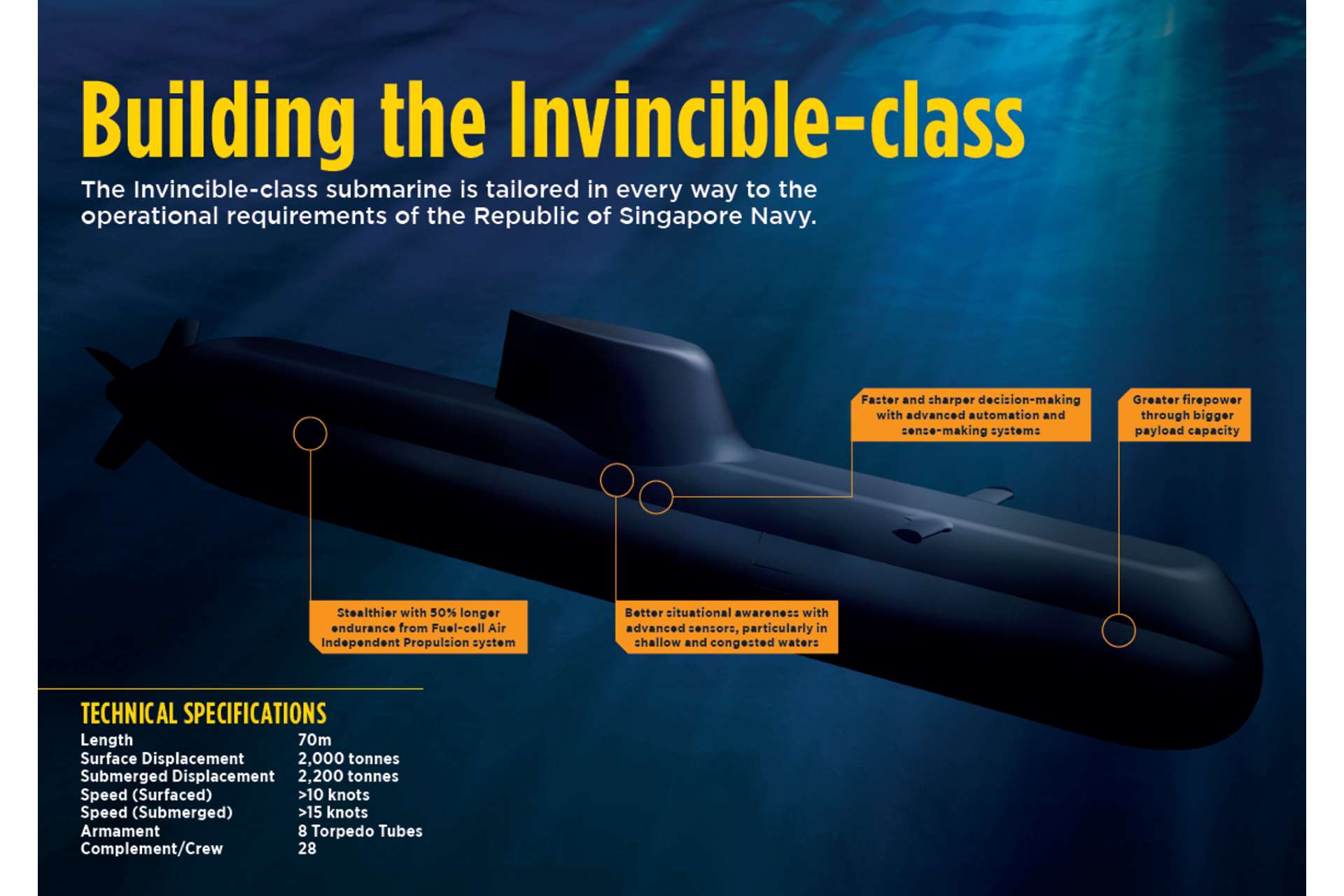 The newly launched Invincible-class submarines will join the Republic of Singapore Navy (RSN)'s surface fleet to protect Singapore and secure access to her sea lines of communication. These new submarines are customised for our operating environment, particularly the shallow and busy waters in our region. As the overall programme manager, Defence Science and Technology Agency (DSTA) had also pushed boundaries in the front-end design of the submarines and in the integration of its combat and platform systems.

Named Invincible, Impeccable, Illustrious and Inimitable, the new submarines will form the strategic edge of Singapore's defence. The submarines are expected to be delivered from 2021 onwards and will replace the current Archer and Challenger-class submarines, which the RSN has operated for over two decades.

Better Mission Capabilities. The Invincible-class submarines are equipped with significantly improved capabilities. They will be fitted with Air Independent Propulsion systems based on Fuel Cell Technology, which will allow the submarines to stay submerged about 50% longer. They will also carry a wider range of mission payloads.

See Further, Act faster. Modern combat systems and more capable sensors, with linkages to the RSN and wider SAF, will enable the new submarines to have improved wide-area awareness. Together with advanced automation and indigenously-developed sense-making systems in combat and platform suites, the new submarines will have enhanced situational awareness and accelerated decision-making support systems, allowing submariners to rapidly orientate themselves, decide on the best course of action, and act. The sense-making systems include data analytics and decision support engines developed by DSTA.

Holistic Design Approach. The Invincible-class submarines incorporate design innovation and advanced maintenance and engineering concepts to optimise training, operation and maintenance costs. Factors such as ergonomics optimised for Asian bodies and systems for tropical operations, such as air-conditioning systems, were considered in the design of the submarines. Modelling and simulation studies were also conducted by DSTA to optimise the design, equipment selection and their layout to reduce maintenance efforts.