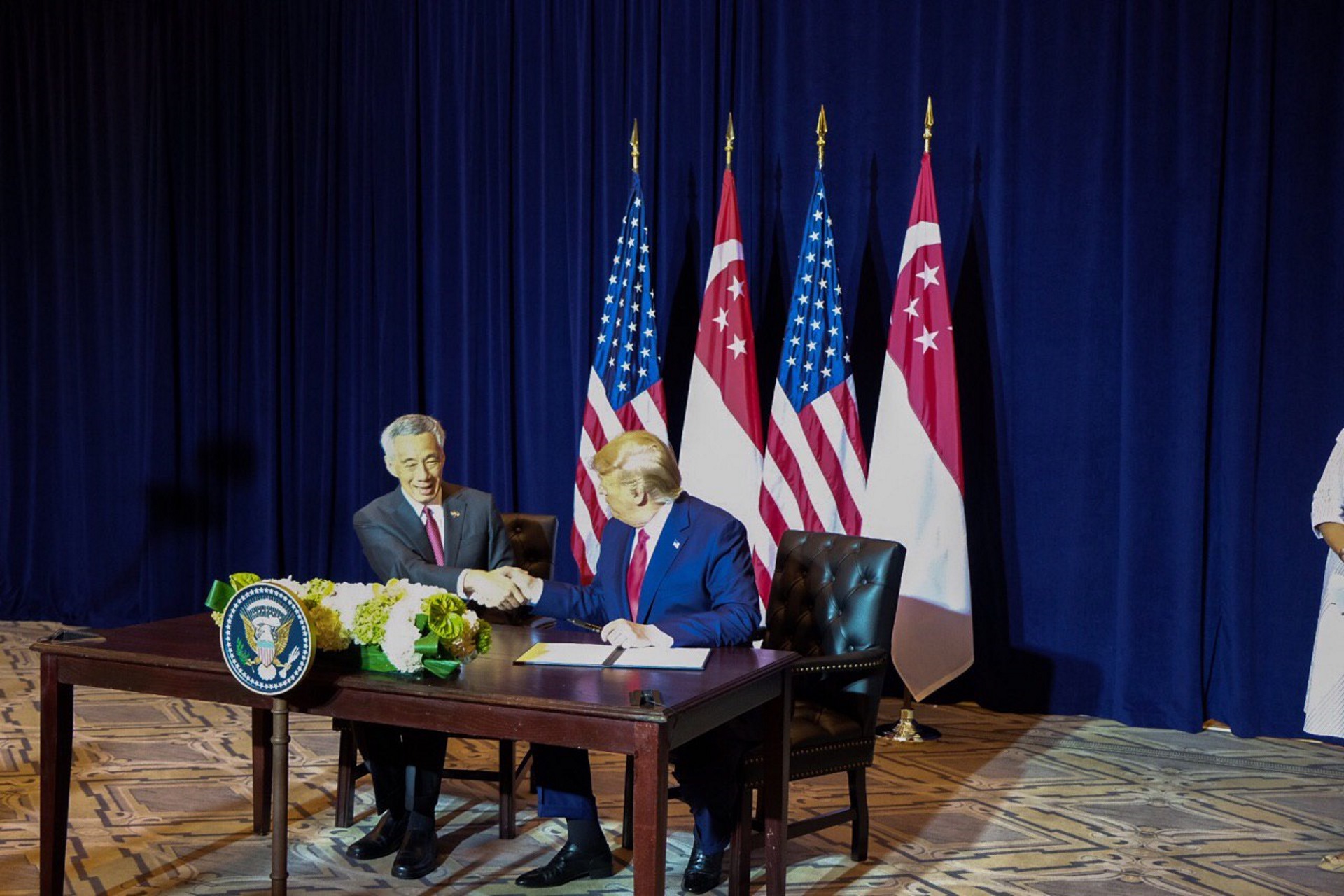 Prime Minister (PM) Lee Hsien Loong and President of the United States of America Donald Trump shaking hands after signing the Protocol of Amendment to the 1990 Memorandum of Understanding Regarding United States Use of Facilities in Singapore. 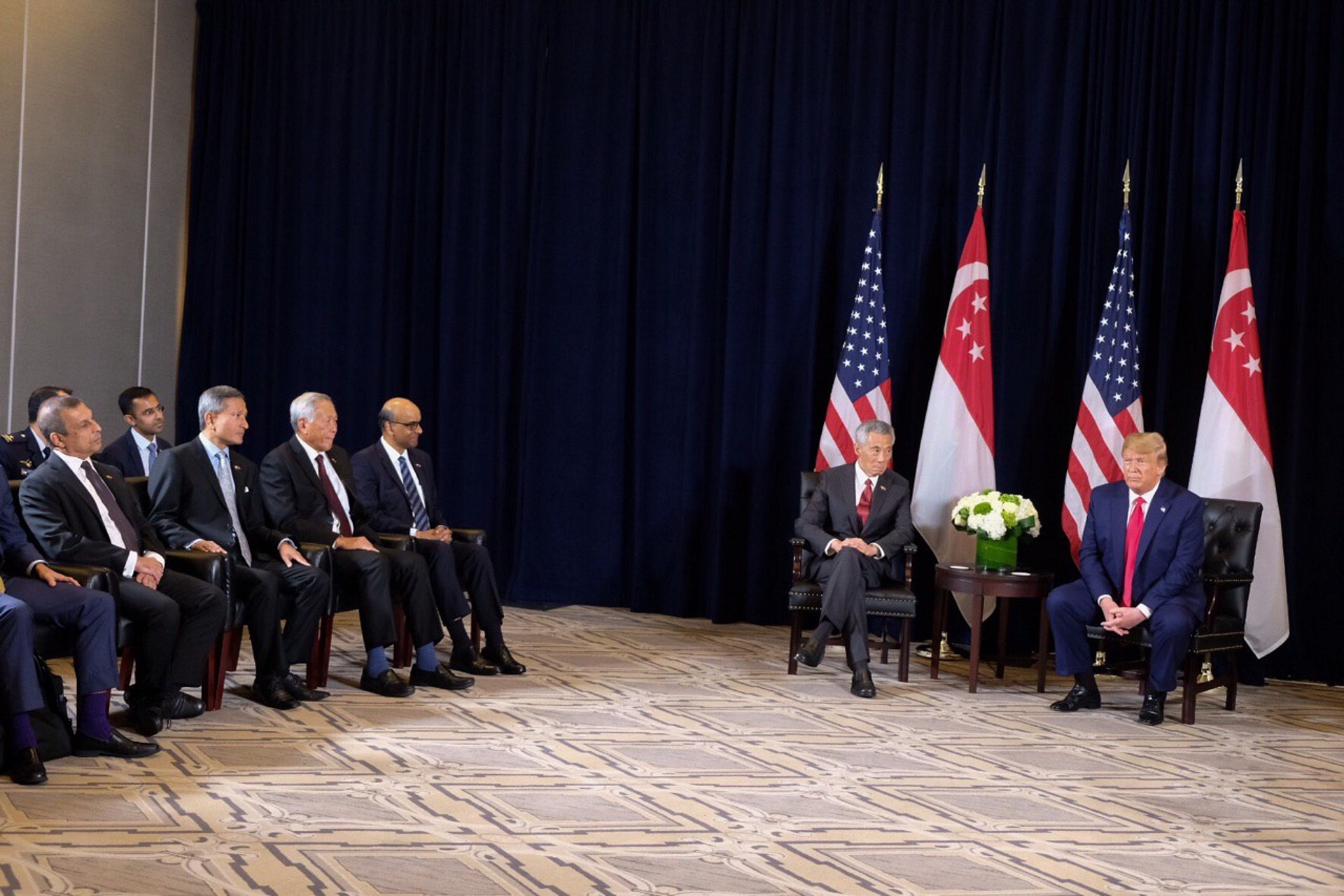 Minister for Defence Dr Ng Eng Hen (third from left) and other Singapore ministers at the meeting between PM Lee and President Trump.

Prime Minister Lee Hsien Loong and President of the United States of America Donald Trump signed the Protocol of Amendment to the 1990 Memorandum of Understanding ("1990 MOU") Regarding United States Use of Facilities in Singapore ("2019 AMOU") today. The 2019 AMOU renews the 1990 MOU by extending it for another 15 years.

The 1990 MOU, signed by our founding Prime Minister Lee Kuan Yew and then-United States (US) Vice President Dan Quayle, has underpinned the US' security presence in the region for almost 30 years. The agreement facilitates US' forces access to Singapore's air and naval bases, and provides logistic support for their transiting personnel, aircraft and vessels. Under its ambit, the US has rotationally deployed fighter aircraft for exercises, refuelling and maintenance, and Littoral Combat Ships and P-8 Poseidon aircraft to Singapore since 2013 and 2015 respectively. The renewal of this document underscores the support for US' presence in our region which remains vital for regional peace, stability and prosperity.

Earlier today, Minister for Defence Dr Ng Eng Hen spoke with US Secretary of Defense Mark Esper over the phone. Acknowledging the milestone renewal of the 1990 MOU, Dr Ng and Secretary Esper reaffirmed the excellent and long-standing bilateral defence relationship, as well as the importance of the US' continued engagement of the region. Secretary Esper expressed appreciation for Singapore's enduring support for the US' regional presence. During the phone call, both sides also discussed the good progress of key ongoing initiatives, particularly in defence technology and military-to-military cooperation. Dr Ng also thanked Secretary Esper for the US' continuing support for the Singapore Armed Forces' overseas training in the US.

The 1990 MOU is one of several milestone bilateral defence agreements with the US. In 2005, the Strategic Framework Agreement (SFA) elevated bilateral defence relations, uniquely recognising Singapore as a Major Security Cooperation Partner of the US. Under the 2005 SFA, then-Minister for Defence Teo Chee Hean and then-US Secretary of Defense Donald Rumsfeld also signed the 2005 Protocol of Amendment to the 1990 MOU and the 2005 Defence Cooperation Agreement (DCA), which provided for new areas of mutually beneficial cooperation. In 2015, Singapore and the US concluded the enhanced DCA, which built on the 2005 SFA to deepen cooperation in non-conventional and emerging security areas.

Fact Sheet: 2019 Protocol of Amendment to the 1990 Memorandum of Understanding