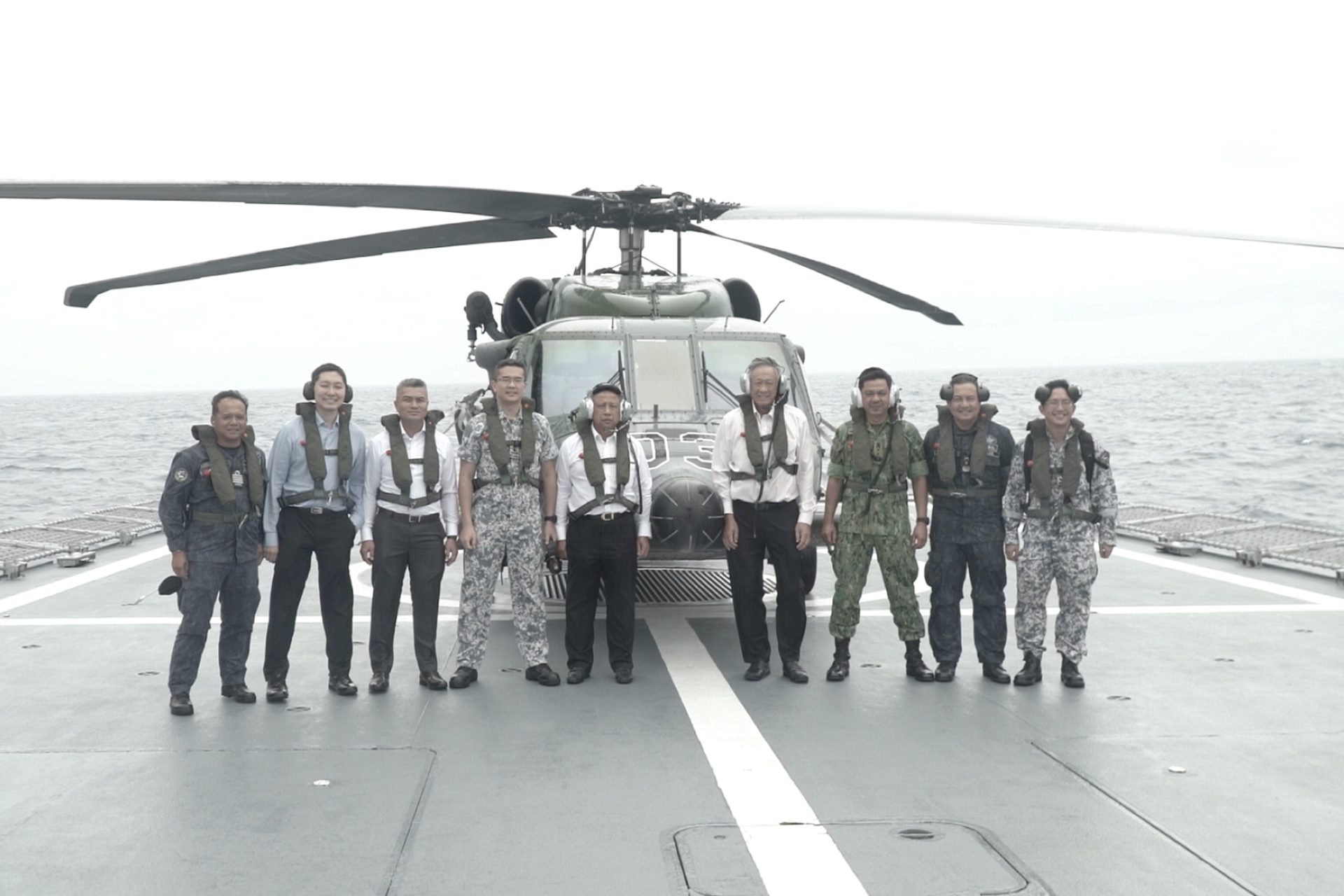 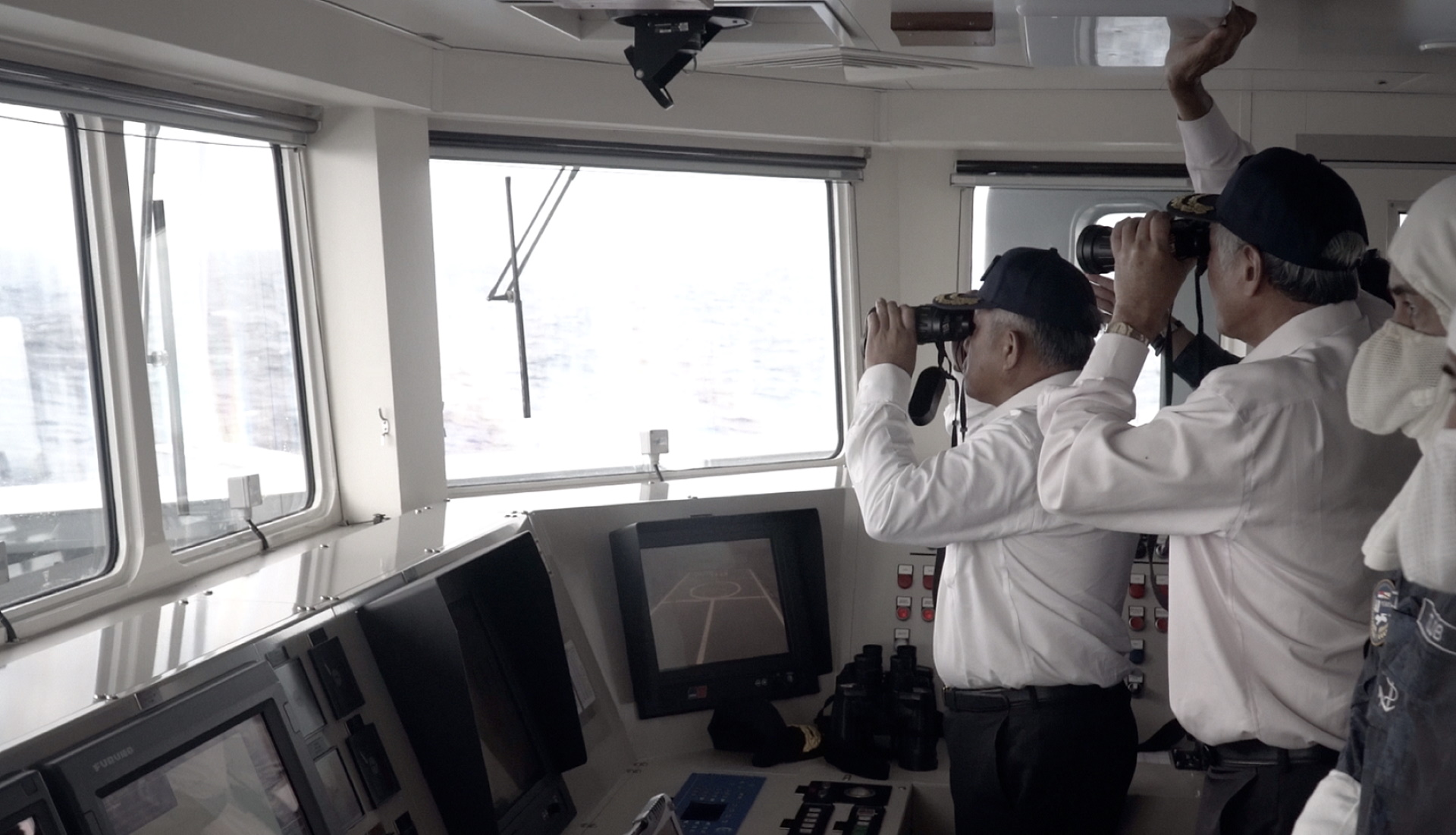 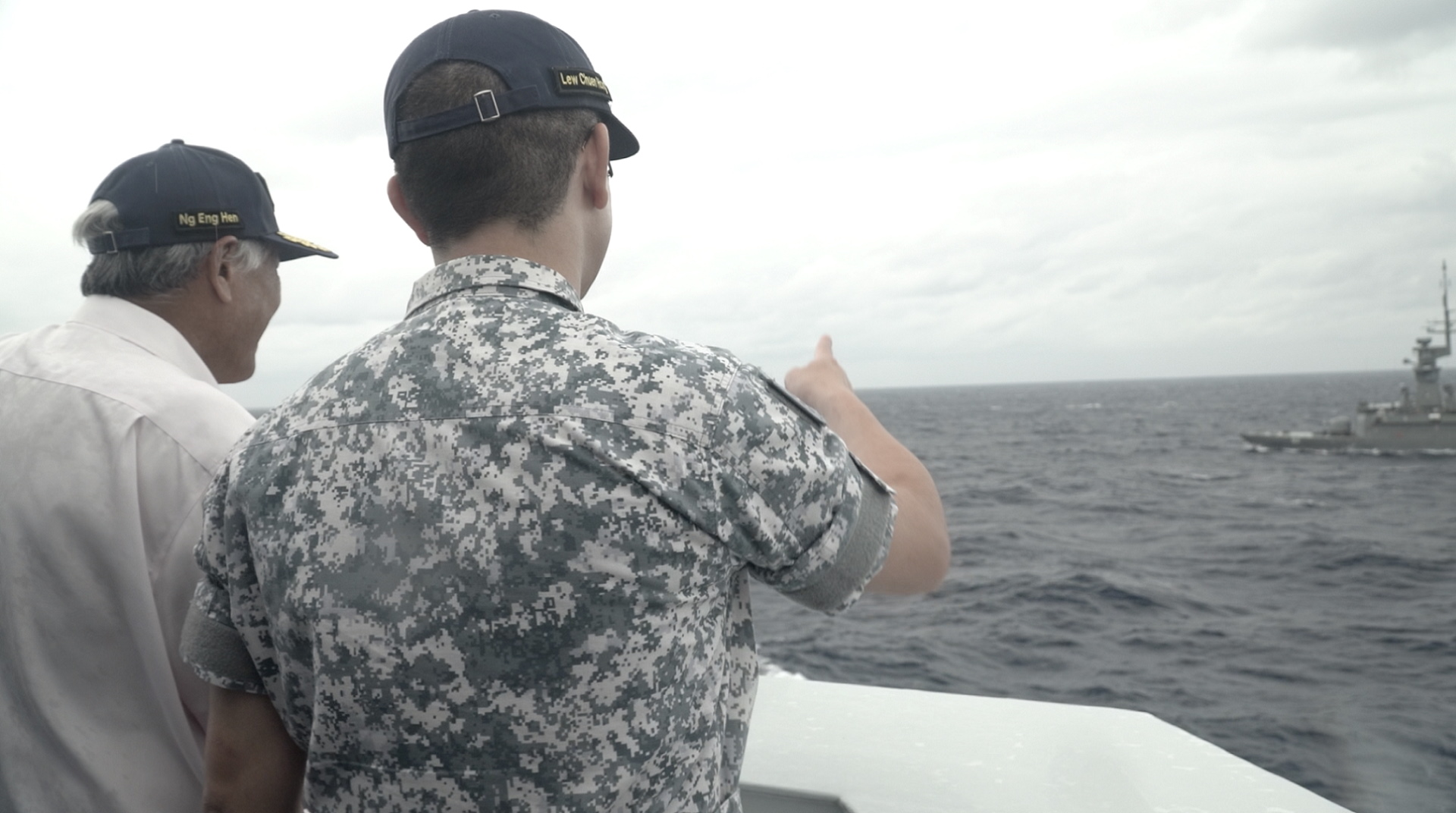 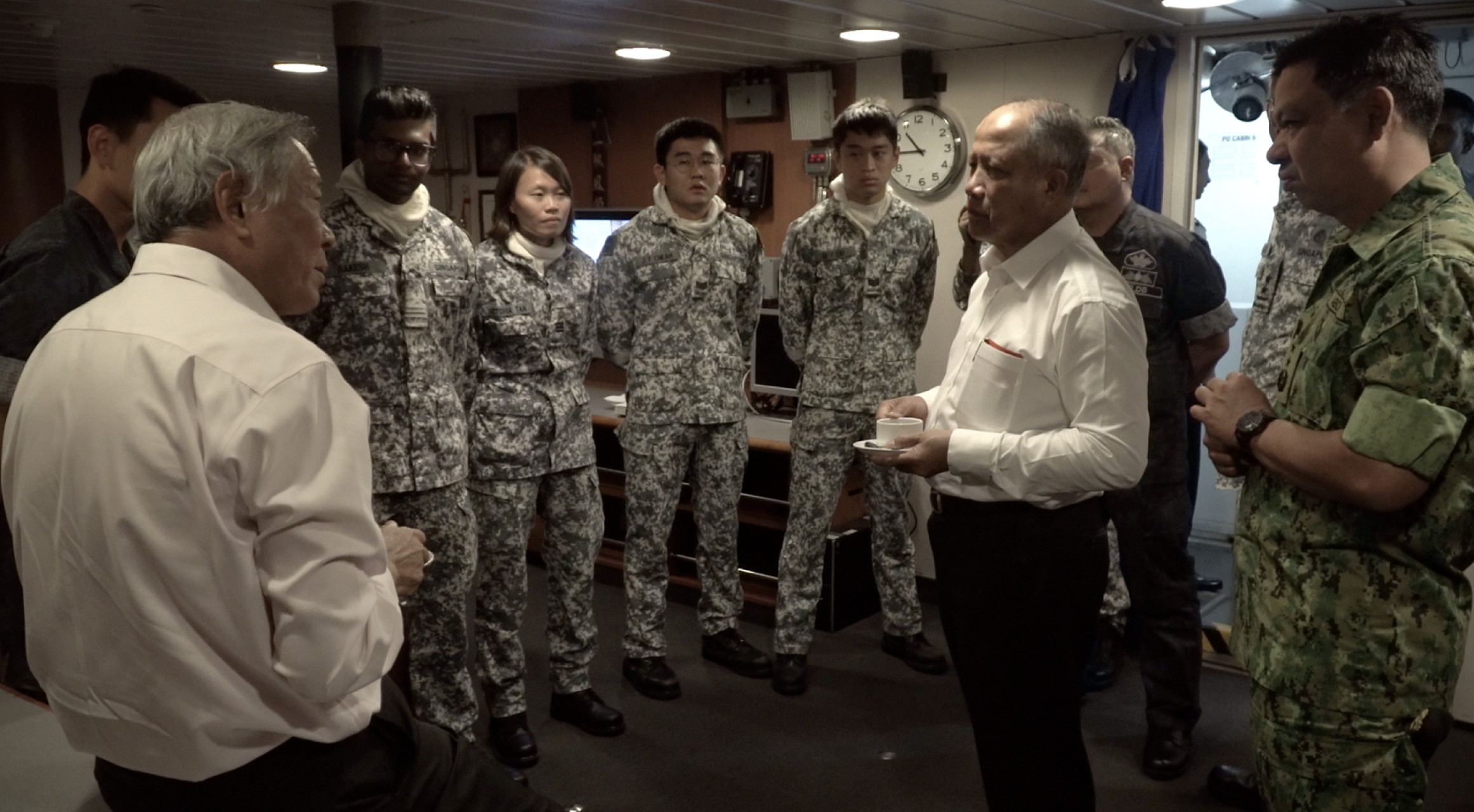 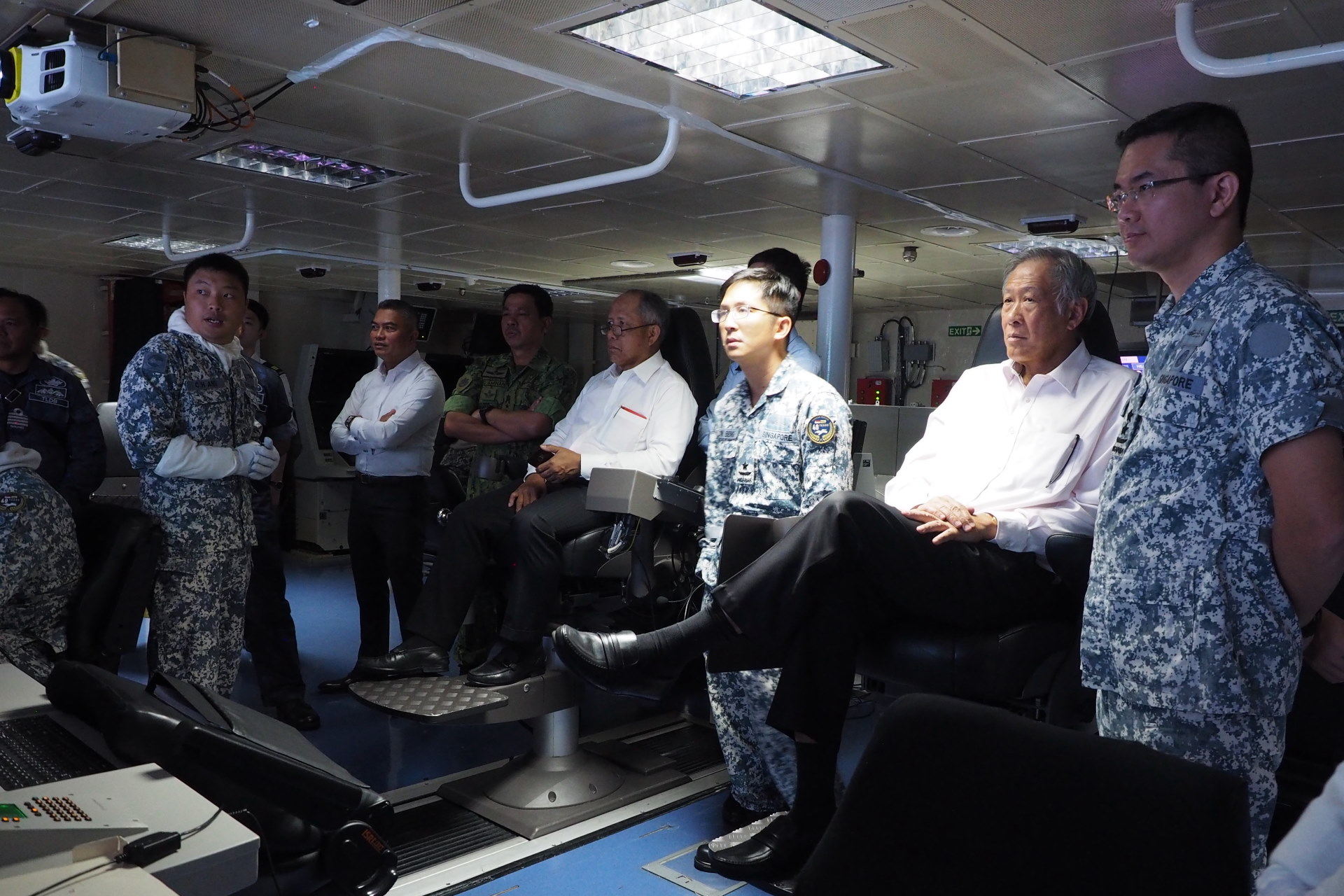 Dr Ng (second from right) and Pehin MG (Rtd) Halbi (fourth from right) viewing the deployment of RSN’s ScanEagle Unmanned Aerial Vehicles, which were deployed from RSN's Missile Corvettes, from the Combat Information Centre on board RSS Tenacious.

This year's Exercise Pelican is being conducted from 3 to 7 November 2019 in the waters off Brunei. In addition to the coordinated task group operation witnessed by Dr Ng and Pehin MG(Rtd) Halbi, both navies conducted other serials such as manoeuvring drills and communications exercises. Later today, Dr Ng and Pehin MG(Rtd) Halbi will also attend the commemorative dinner which marks the 40th anniversary of Exercise Pelican.

During the exercise opening ceremony, RSN's Chief of Navy, Rear-Admiral Lew Chuen Hong highlighted the significance of this year's Exercise Pelican as it marked 40 years of successful naval cooperation. He said, "We started from humble beginnings – with basic seamanship and manoeuvring serials. Today, we have grown the exercise in scale and complexity. We now operate warships with advanced technology, and regularly conduct advanced warfare serials and complex tactical manoeuvres. We have also significantly enhanced interoperability with multiple cross-deck landings."

Established in 1979, Exercise Pelican underscores the close and long-standing defence ties between Singapore and Brunei. The exercise enhances mutual cooperation, understanding, and interoperability between the RSN and RBN. Besides Exercise Pelican, the RSN and RBN also interact regularly through a range of activities, including visits and professional exchange programmes. These interactions have reinforced the strong bonds between the two militaries.