The beginnings of Total Defence (TD). Borrowed and adapted from Sweden and Switzerland, our concept of Total Defence was first introduced in 1984 as "the national defence concept" that rallies all Singaporeans behind the Singapore Armed Forces (SAF) should we face a military threat in a conventional war scenario. Total Defence was also envisioned to build up in peacetime the people's determination to stand up for Singapore under all circumstances through its core of Psychological Defence.

Evolution of TD. With the rise of terrorism post-9/11, TD has been contextualised to address new threats, and applied to address non-military challenges and crises such as pandemics, economic recessions and natural disasters. In 2015, Defence Minister Dr Ng Eng Hen talked about how Singapore's Total Defence strategy is the "exact antagonist" of hybrid warfare, an orchestrated campaign to fracture the solidarity of the target nation through undermining its defences in civil, economic, social, psychological and military spheres. At the Committee of Supply Debate in 2016, he reiterated that hybrid warfare is the "antithesis of Total Defence". Over the years, the relevance of Total Defence as a concept to tackle national challenges has thus increased in the light of the ever evolving threat landscape. However, while the narrative and theme of TD has always been adjusted and adapted over the years to reflect the security threats and challenges Singapore faces, the core message then and now remains relevant – that every Singaporean has a part to play through each pillar of TD.

TD Themes. The posters below reflect the evolving narratives of Total Defence since 1984, from rallying behind the SAF to addressing threats like terrorism and encouraging Singaporeans to play a part and put TD into action in their daily lives. The theme of the Total Defence campaign since 2016 has been "Together We Keep Singapore Strong". 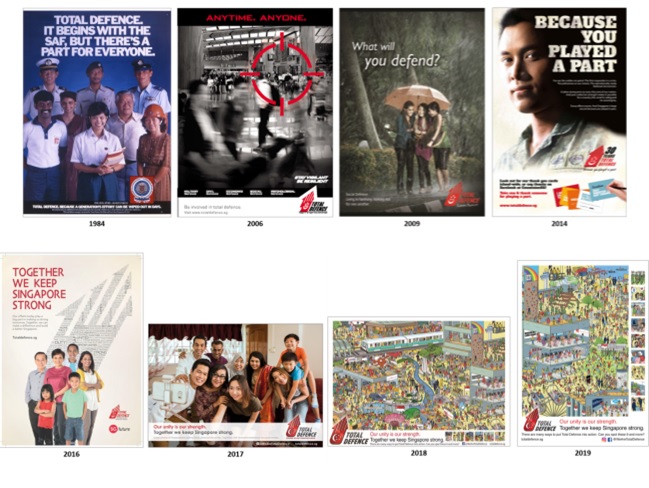 TD Logo Design Public Competition in 1985. The first TD logo, in the familiar shape of a hand, was the winning entry of a competition organised by the Ministry of Defence back in 1985. The guidelines were to design a logo that would depict the first TD theme, "There's a part for everyone in total defence of Singapore". In the course of two months, over 1,700 logo designs were submitted. After a public voting from more than 20,000 members of the public, freelance graphic designer Berwin See won the competition.

The meaning of the current TD logo. The five arrows in the logo represent the five pillars of Total Defence: Military, Civil, Economic, Social and Psychological Defence. The arrows point in the same upward direction, signifying a concerted effort towards the common objective of safeguarding the progress and future of Singapore. The logo's outline is significant because:

•    It is the outline of a hand, symbolising action and representing unity and completeness. Total Defence will not be effective if any of the five "fingers" is missing.
•    It is the shape of a house, and symbolises Singapore as our homeland. With Total Defence, the security of our homeland is safeguarded.

The crescent and five stars, and the colours of red and white, are elements from the National Flag. Red stands for universal brotherhood and equality of man. White symbolises pervading and everlasting purity and virtue. The crescent moon represents a young nation on the ascendant, and the five stars depict Singapore's ideals of democracy, peace, progress, justice and equality. Together, these represent nationhood and symbolise how Total Defence supports our progress as a people and a nation. The metallic sheen on the logo reminds us that we need to have that steel in us to help Singapore remain a shining red dot.

Taken as a whole, the logo symbolises all Singaporeans each playing their part in Total Defence to safeguard our future.

TD Icons. Other than the TD Logo, the five pillars are also represented with their individual icons. These visual cues for each pillar were co-created with then student-designer, Ms Wong May Ching from Temasek Polytechnic in 2005.

2018
Refreshed TD Icons 2018
The icons were updated to include a shield with a metallic sheen to adopt a consistent branding with the refreshed TD logo.