Minister for Defence Dr Ng Eng Hen (left) and US Secretary of Defense Mark Esper signing the Memorandum of Understanding (MoU) concerning the establishment of a Republic of Singapore Air Force Fighter Training Detachment at Andersen Air Force Base, Guam on the sidelines of the 7th Reagan National Defense Forum. 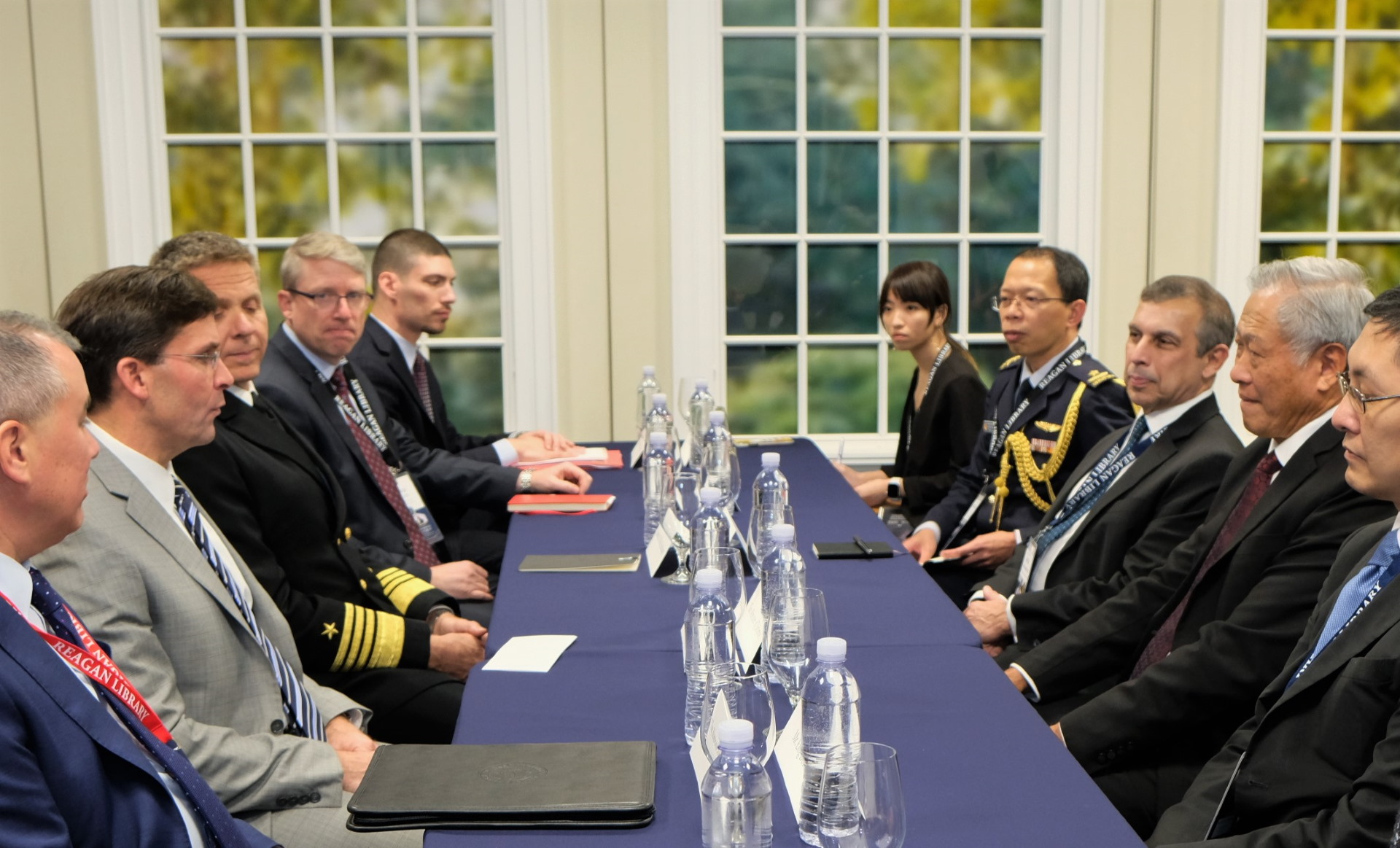 Dr Ng (second from right) and Secretary Esper (second from left) in a bilateral meeting prior to the signing of the MoU.

Minister for Defence Dr Ng Eng Hen and United States (US) Secretary of Defense Mark Esper signed a Memorandum of Understanding (MoU) concerning the establishment of a Republic of Singapore Air Force (RSAF) Fighter Training Detachment at Andersen Air Force Base (AAFB), Guam, after their bilateral meeting today. This agreement lays out the framework for the RSAF's detachment in Guam, covering the deployment of the RSAF's F-15SG and F-16 fighter aircraft and other supporting assets such as the Gulfstream 550 – Airborne Early Warning (G550-AEW) to AAFB for training. This builds on the SAF's longstanding training in Guam since the 1990s and the periodic deployments of RSAF fighter aircraft to Guam since 2017. Guam would be the fourth RSAF detachment on US territory after the Peace Carvin II F-16 fighter detachment at Luke Air Force Base (Arizona), Peace Carvin V F-15SG fighter detachment at Mountain Home Air Force Base (Idaho) and Peace Vanguard AH-64 Apache helicopter detachment at Marana (Arizona). These overseas detachments serve RSAF's training needs to maintain operational readiness for Singapore's air defence. This detachment in Guam, alongside other fighter deployments which train in the region such as in Australia, India and Thailand also allow quick re-deployment of assets back to Singapore when required.

Noting that this initiative followed closely after the recent renewal of the 1990 Memorandum of Understanding Regarding US Use of Facilities in Singapore in September 2019, Dr Ng and Secretary Esper reaffirmed the excellent and long-standing defence relationship, and the mutually-beneficial partnership between both countries. Dr Ng also expressed appreciation for the US' longstanding support for the Singapore Armed Forces' overseas training in the US. Both sides discussed the strong ongoing cooperation between both defence establishments, in areas such as defence technology and military-to-military cooperation. Dr Ng and Secretary Esper also reaffirmed the importance of the US' continued engagement of the region, and discussed a wide range of geopolitical developments, including the need to work closely with ASEAN countries to address regional security issues such as counter-terrorism.

Dr Ng is in the US from 6 to 8 December 2019 (SG time) to attend the 7th Reagan National Defense Forum. Dr Ng will speak at a panel session titled "Advancing US National Defense: Working with Allies and Partners" tomorrow.

Fact Sheet: Establishment of a Fighter Training Detachment in Guam