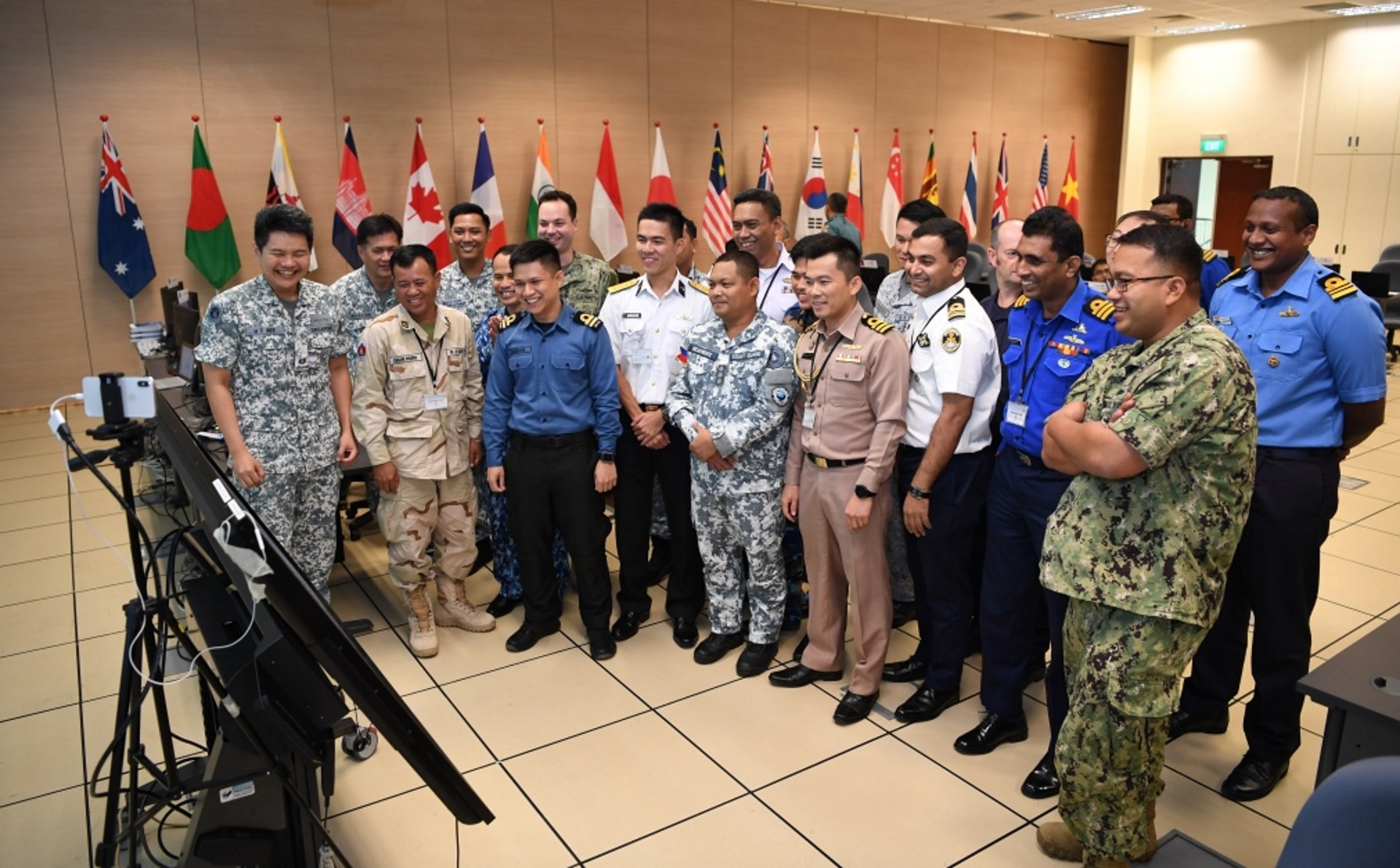 Exercise SEACAT participants at the Combined Maritime Coordination Centre (CMCC) set up at the RSN's Changi Command and Control Centre at a teleconference with their counterparts at the secondary CMCC in Manila, Philippines.

The Republic of Singapore Navy (RSN) is taking part in the annual multilateral Southeast Asia Cooperation and Training (SEACAT) exercise. This year's exercise is conducted from 19 to 30 August 2019, with participants from Bangladesh, Brunei, Cambodia, Indonesia, Malaysia, the Philippines, Singapore, Sri Lanka, Thailand, the United States and Vietnam. The United States Navy (USN)-led exercise aims to increase cooperation and information-sharing among navies and coast guards from South and Southeast Asia to strengthen regional responses against maritime terrorism and piracy.

The sea phase of the exercise is held at the Straits of Malacca and Singapore and at the South China Sea from 26 to 30 August 2019. The exercise headquarters, called the Combined Maritime Coordination Centre, is set up at the RSN's Changi Command and Control Centre (CC2C). During the exercise, liaison officers from the various countries use the Information Fusion Centre (IFC) Real-time Information-sharing System (IRIS) to fuse and sense-make information to identify vessels of interest. The respective operations centres from the participating navies and coast guards are then cued to deploy aircraft and ships to investigate the suspicious vessels.

Prior to the sea phase of the exercise, a Maritime Security Professional Development workshop was held in Singapore from 20 to 23 August 2019, where IFC gave a presentation on the regional maritime security situation. Other international participants also gave presentations on case studies of maritime security incidents in Southeast Asia. At the same time, the RSN’s Accompanying Sea Security Team participated in a Vessel Board Search and Seizure workshop that was concurrently held in Manila, Philippines, from 19 to 23 August 2019.

First established in 2002, Exercise SEACAT is in its 18th edition this year. This is also the tenth consecutive year that the exercise command post is situated at the RSN’s CC2C, which reflects Singapore's strong support for continued engagement efforts with regional navies and coast guards.