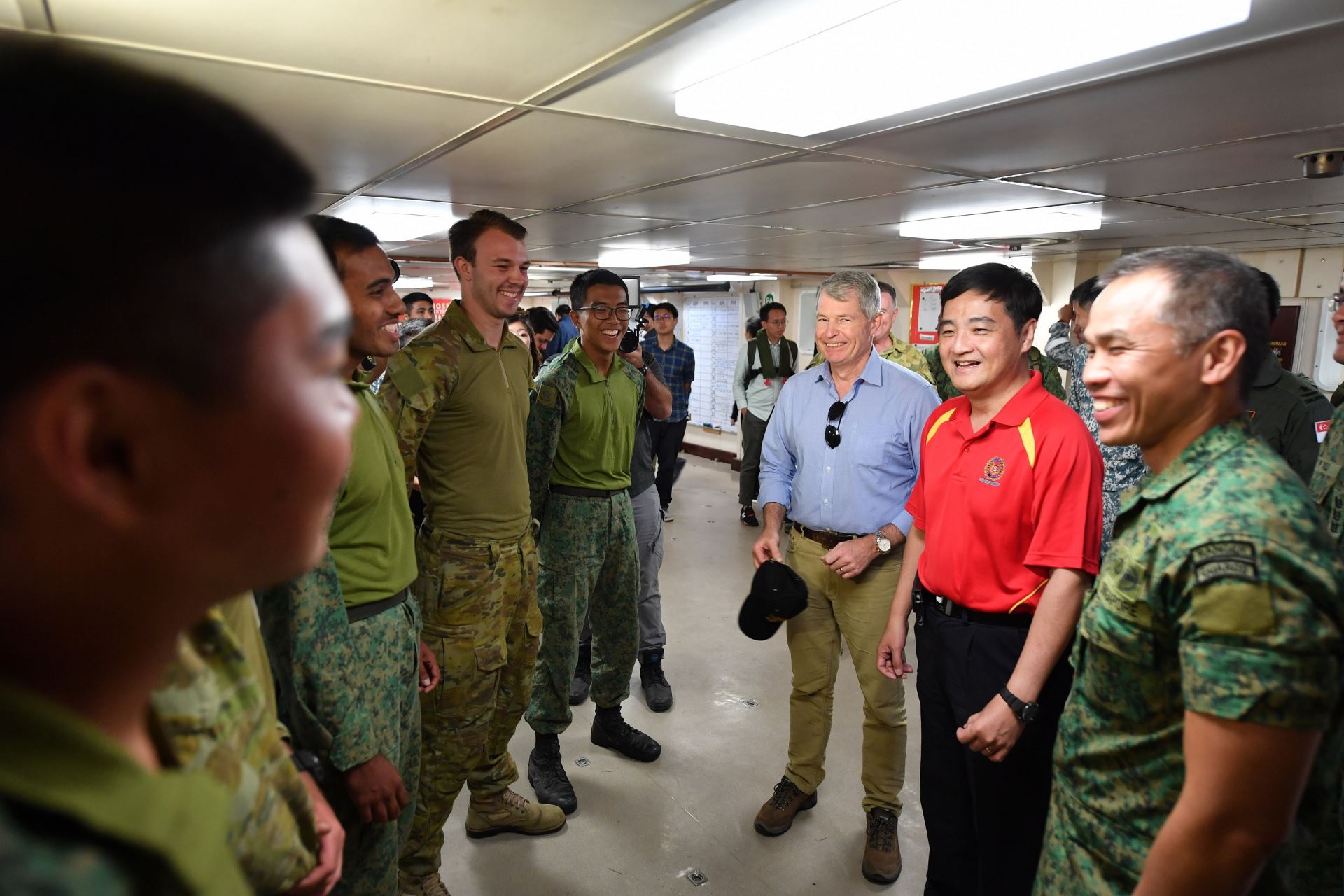 Mr Heng and Mr Fawcett interacting with the exercise participants from the SAF and ADF. A 5-Tonner vehicle disembarking from the Fast Craft Utility during a ship-to-shore operation during Exercise Trident. Exercise troops disembarking from the Chinook helicopter during a troop insertion mission during Exercise Trident.

Under the Singapore-Australia Comprehensive Strategic Partnership, signed in 2015, the SAF and the ADF are committed to enhancing bilateral defence relations, including developing Exercise Trident as the signature bilateral joint military exercise.

This year's Exercise Trident, conducted from 31 October to 14 November 2018, involves more than 1,300 personnel from both armed forces, and features the largest participation from the ADF since the exercise was launched in 2013. The exercise involves a battalion-level amphibious operation by the SAF and ADF troops, with supporting personnel as well as air and naval assets such as the Super Puma and Chinook helicopters from the Republic of Singapore Air Force, as well as the Endurance-class Landing Ship Tank (LST) RSS Resolution and Fast Craft from the Republic of Singapore Navy. The exercise also provided opportunities for professional exchanges and air-land integration training, which enhances inter-operability between both armed forces.

During their visit, Mr Heng and Mr Fawcett witnessed the air, land and sea components of Exercise Trident. They also flew on board the Super Puma helicopters and had a good appreciation of the close integration between the air and land forces. Mr Heng and Mr Fawcett also interacted with the SAF and ADF personnel who participated in the exercise.

Mr Heng and Mr Fawcett reaffirmed the close and long-standing defence ties between Australia and Singapore. Mr Heng said, "(Exercise Trident) is a demonstration of the closeness of our defence relations and is something that has gone back decades. It will grow even stronger in the future, so I am very thankful that the Australian government has been such a close partner to us." He added, "It is a privilege for me to be able to come and observe Exercise Trident together with Minister Fawcett… it really goes to show the great value of training here in Australia, and how Singapore is able to overcome the physical constraints that we face in order for our Armed Forces to be able to learn to fight in a very integrated way and thereby increasing our effectiveness." Mr Fawcett said, "The Comprehensive Strategic Partnership that we have and is developing, is a good bedrock for bilateral training… and (in this exercise), we bring the two forces together and we improve our ability to operate."

Exercise Trident is a key component of the SAF's annual Exercise Wallaby, which is conducted from 19 September to 17 November 2018. Exercise Wallaby 2018 marks the 28th year of the SAF's training at Shoalwater Bay Training Area, and is a testament to the close and long-standing defence relationship between Singapore and Australia. The SAF and the ADF share a long history of military cooperation, with extensive interactions that include bilateral and multilateral exercises, mutual visits, professional exchanges and joint operational deployments in countries such as Afghanistan and Iraq.