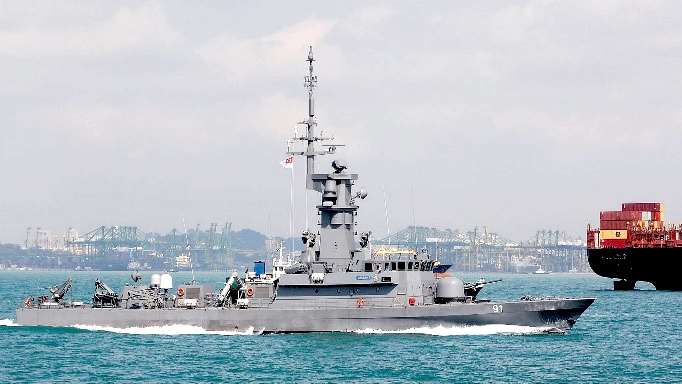 The Victory-class missile corvettes (MCVs) form the backbone of the Republic of Singapore Navy (RSN)'s strike capability and safeguard Singapore's vital sea lines of communication (SLOC). Designed in Germany, the Victory-class MCVs were acquired in the late-1980s to augment the Sea Wolf-class missile gun boats (MGBs). The first corvette was built and launched in Germany, while the remaining five vessels were built domestically by Singapore Technologies Marine.

The RSN's First Anti-Submarine Platform. Before the introduction of the MCVs, the RSN's strike craft, made up by the MGBs, were equipped to handle surface and air threats, but not underwater submarine threats. The MCVs with their anti-submarine warfare capabilities marked the RSN’s foray into three-dimensional warfare. Their lightweight torpedo and variable-depth sonar provided the RSN with means to deal with submarine threats. The MCVs hence laid the foundations upon which the RSN built and honed its anti-submarine capabilities. These capabilities now reside with the Formidable-class frigates and their organic S-70B Seahawk naval helicopters.

Maintaining the RSN's Warfighting Edge. The MCVs have undergone various enhancements to better deal with evolving threats and to tackle technology obsolescence. In the mid-90s, the vessels were equipped with Barak surface-to-air missiles. In 2009, the MCVs underwent several upgrades and were fitted with an enhanced Combat Management System and sensor systems, including the introduction of the ScanEagle Unmanned Aerial Vehicle (UAV). This has enabled the MCVs to maintain their sharp edge, while re-defining the craft's role in the 3rd Generation RSN.

a. Enhanced Systems for Greater Integration with the SAF/RSN. Advanced communications systems allow the upgraded MCVs to communicate more effectively with the rest of the RSN and SAF through the Integrated Knowledge Command and Control (IKC2) network. The enhanced Combat Management System, together with advanced sensor systems, further enabled the MCVs to detect and react faster to potential threats.

b. ScanEagle UAV for Better Maritime Awareness. The ScanEagle UAV system was acquired to give the MCVs an organic surveillance capability. The successful operationalisation of the system represented an important development in the build-up of shipborne tactical UAV capability, significantly boosting the MCV's surveillance and identification abilities, thereby enabling the RSN to see further and better.

Extending the RSN's reach and influence. The MCVs provided the RSN with the ability to move beyond the seaward defence of Singapore, to fulfil a strategic role in the protection of vital SLOCs. In addition, the MCVs also gave the RSN the ability to extend its reach beyond the region, enhancing the engagement of strategic partners through exercises and port calls. In 1991, the MCVs took part in the first Exercise Southern Friendship with the Royal Australian Navy (RAN) and the Royal New Zealand Navy, going on the MCVs' longest and farthest sea deployment then. To date, the MCVs have successfully exercised with key global partners including the United States, through the multilateral Cooperation Afloat Readiness and Training (CARAT) exercise, and India, through the Singapore-India Maritime Exercise (SIMBEX). The MCVs continue to participate in naval exercises with regional partners such Exercise Kakadu hosted by the RAN, Exercise Malapura with the Royal Malaysian Navy, and Exercise Singsiam with the Royal Thai Navy.

Going beyond warfighting. Besides its primary role as the RSN's strike platform, the MCVs have participated in a variety of key exercises and operations during peacetime. These include the inter-agency Exercise APEX, where they demonstrated their capability to protect our key infrastructure from non-conventional threats, and search-and-locate operations. RSS Vigour was deployed to the South China Sea in support of search efforts for the missing Malaysian Airlines flight MH370 in 2014, while RSS Valour was similarly involved in the multinational search operations for Air Asia flight QZ8501 in 2015. Most recently, RSS Valour was deployed to support security operations for the DPRK-USA Singapore Summit.

The RSN has qualified Operationally Ready National Servicemen (NSmen) to operate the MCVs, making the RSN one of the few navies in the world to deploy reservist servicemen to fully crew a warship. This allows the RSN to optimise manpower resources by tapping on the years of operational and technical knowledge held by these servicemen. The NSmen are put through a structured training programme to ensure they attain the competency needed to operate the MCVs.

Looking Forward to the Future

Come 2020, the MCVs will have been in service for 30 years and will reach the end of their operational lifespans by 2025. In anticipation of this, the RSN will be developing Multi-Role Combat Vessels (MRCVs). These vessels build on the NS-by-design experiences in the MCVs by leveraging on key technologies such as configurable modular payloads and unmanned systems. In this manner, the MRCVs can function as flexible "motherships" capable of deploying unmanned drones to suit various missions from peace to war.