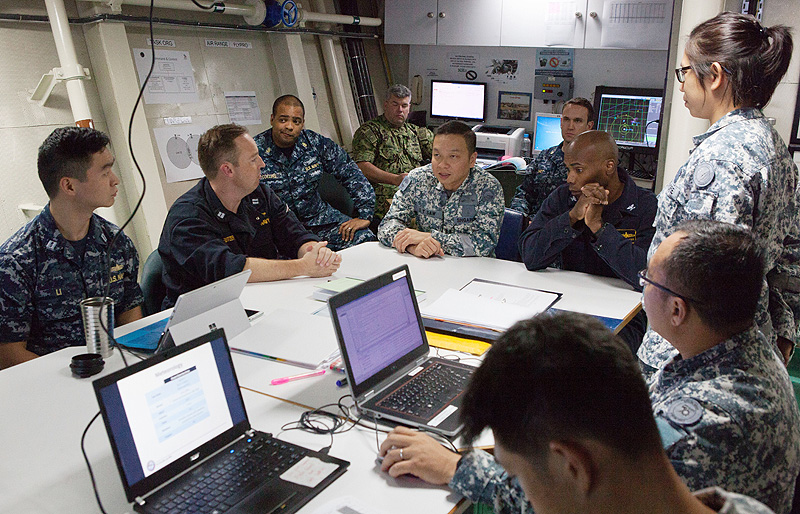 With the vast training space available in the waters off Guam, Exercise Pacific Griffin provided the RSN with the opportunity to conduct high-end exercises of substantial scope and complexity. The exercise featured advanced warfare training between the RSN and USN, across the full-spectrum of anti-submarine, anti-surface and anti-air warfare.

Commander First Flotilla and Commanding Officer of 185 Squadron Colonel Saw Shi Tat highlighted the value of the exercise in enhancing professionalism and interoperability among the two navies. He said, "The operating environment in Guam gave us the opportunity to hone our edge and push our operational envelopes. It also allowed us to operate with our friends and partners from around the world, including the USN."

Underscoring the excellent and long-standing bilateral defence relationship, Commodore of the USN's Destroyer Squadron 7 Captain Lex Walker added, "The US Navy deeply values our close partnership with the RSN. Exercise Pacific Griffin provides a unique opportunity for both navies to interact and engage in a broader and more complex range of maritime scenarios and operations. The complexity and sophistication of Exercise Pacific Griffin is a direct result of the many accomplishments and lessons we've learned from working together with the RSN for many years."

The RSN also took the opportunity to conduct unilateral live-firings on the sidelines of Exercise Pacific Griffin. A Designated Time-on-Target Harpoon missile live-firing was conducted by the RSN. This involved both of the RSN frigates firing a missile each to hit the same target simultaneously. Separately, RSS Stalwart and a Sikorsky S-70B Seahawk naval helicopter embarked on RSS Supreme neutralised a simulated underwater threat during a torpedo firing exercise. The RSN was last in Guam in 2014 during the multinational group sail to Hawaii for the Rim of the Pacific (RIMPAC) Exercise.