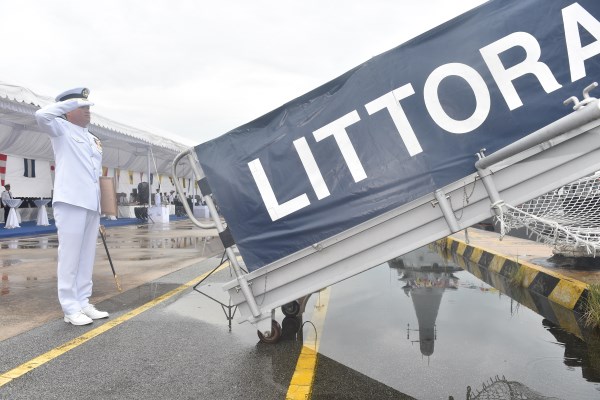 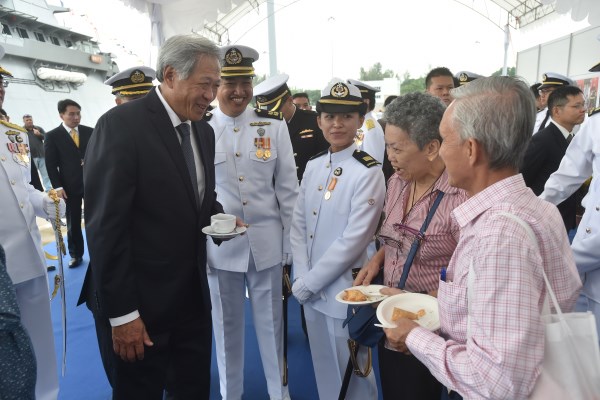 Minister for Defence Dr Ng Eng Hen officiated at the commissioning ceremony of the Republic of Singapore Navy (RSN)'s Littoral Mission Vessels (LMVs) RSS Sovereignty and RSS Unity at RSS Singapura - Changi Naval Base today. The commissioning of RSS Sovereignty and RSS Unity marks a significant milestone in the RSN's continued transformation to strengthen its capabilities, as the two LMVs join the rest of the Navy to safeguard Singapore's waters, protect its sea lines of communication and contribute to regional peace and security.

Speaking at the ceremony, Dr Ng highlighted the need to adapt and prepare for future challenges as the range of threats and spectrum of missions have expanded. He said, "Today, the RSN already contributes to regional and global security efforts… Going forward, the demands on our RSN will increase. Part of this reflects both the rising trade as well as the military build-up of regional navies in our surrounding waters." Dr Ng added that the LMVs are future-ready ships built to respond to these different mission requirements and fulfil the RSN's role in keeping Singapore's sea lines of communication secure and accessible for the nation's economic growth and prosperity. He added, "The LMVs represent a quantum jump compared to its predecessor, the Fearless-class patrol vessels. Whether it is speed, endurance, anti-air or Command, Control, Communications and Computers (C4) capabilities, the LMVs outperform by leaps and bounds the Patrol Vessels that were built in the 1990s… With today's commissioning, RSS Sovereignty and RSS Unity will join RSS Independence to expand the range and effectiveness in missions."

Jointly developed by the RSN and the Defence Science and Technology Agency, the Independence-class LMVs are equipped with smarter technology and sharper capabilities to enable the RSN to operate more efficiently and effectively. The network-centric ships possess advanced radars and sensors, as well as a 360 degree out-of-window view and improved sense-making systems to enhance situational awareness and accelerate decision-making. The LMVs also have lethal and non-lethal options to deliver calibrated responses to deter and defend against various threats. Their mission modularity further allows the ships to be configured for a wide spectrum of operations.

RSS Sovereignty and RSS Unity are the second and third ships out of eight LMVs that will replace the ageing Fearless-class Patrol Vessels which have been in service for more than 20 years. The first-of-class LMV RSS Independence was commissioned on 5 May 2017 and the remaining five LMVs are expected to be operational by 2020.

Also present at the ceremony were Senior Minister of State for Defence Dr Mohamad Maliki Bin Osman, and senior officials from the Ministry of Defence and the Singapore Armed Forces.