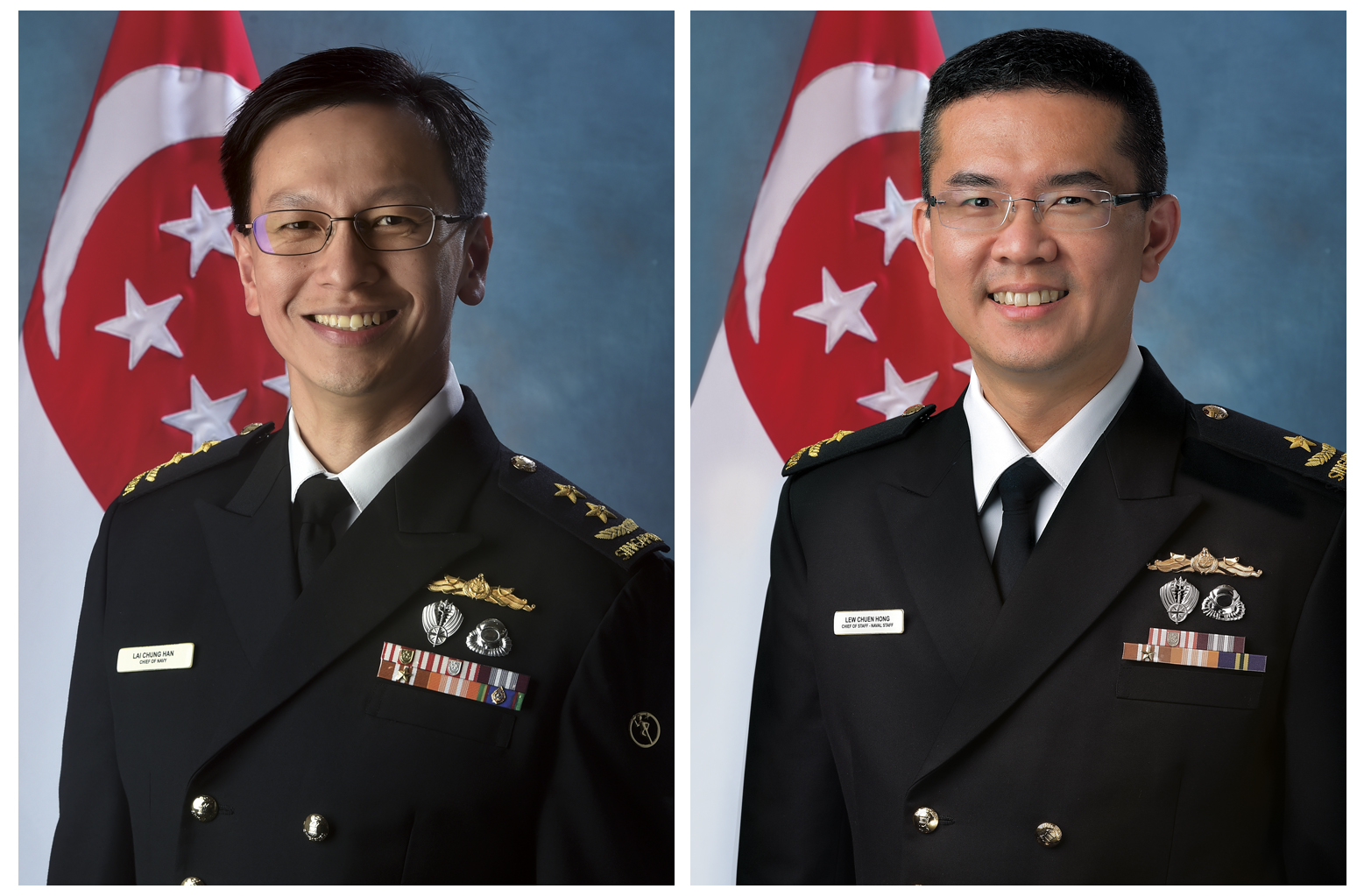 Rear-Admiral (RADM) Lew Chuen Hong, currently Chief of Staff - Naval Staff will take over from RADM Lai Chung Han as the Chief of Navy on 16 June 2017. This change is part of the continuing process of leadership renewal in the Singapore Armed Forces (SAF).

RADM Lai Chung Han, 44, has held the post of Chief of Navy since 1 August 2014. Over the course of his career, he held several senior command and staff appointments in the Ministry of Defence (MINDEF) and the SAF, including Commanding Officer of the Missile Corvette RSS Valiant, Office Director in the Future Systems Directorate, Commanding Officer of the Missile Corvette Squadron, Director (Policy), Fleet Commander and Deputy Secretary (Policy).

Since joining the SAF in 1992, RADM Lai has served the SAF with distinction. As Chief of Navy, RADM Lai maintained the Republic of Singapore Navy (RSN)'s high state of operational readiness and led the RSN to achieve mission success in both regional and international operations, including the RSN's successful command of Combined Task Force 151 in the Gulf of Aden in 2016. He also led the inter-agency Maritime Security Committee in enhancing measures against maritime terrorism and piracy in Singapore. Since 2014, RADM Lai spearheaded the RSN's strategic redesign to structure, resource and deploy the RSN to meet future security challenges. He also initiated efforts to enhance the recruitment of women and mid-careerists for the RSN. During RADM Lai's tenure, the contract for the acquisition of two additional Type-218SG submarines was signed. The RSN also took delivery of four Littoral Mission Vessels, of which the first-of-class, RSS Independence, was commissioned by Prime Minister Lee Hsien Loong on 5 May 2017. On the occasion of the RSN's Golden Jubilee, the RSN hosted the inaugural Singapore International Maritime Review (IMR) on 15 May 2017 which was graced by President Tony Tan Keng Yam. The IMR saw the participation of 46 warships and four aircraft as well as more than 50 military delegations from 44 countries.

The incoming Chief of Navy, RADM Lew, 40, joined the SAF in 1995 and was awarded the SAF Overseas Scholarship. He holds a Bachelors (Honours and Distinction) and Masters in Biology, as well as a Masters in Management as a Sloan Fellow from Stanford University, USA. During the course of his military career, RADM Lew has held, amongst others, the appointments of Commanding Officer of the Missile Corvette RSS Vengeance, Deputy Commander of the Maritime Security Task Force, Head Joint Manpower Department, Head Joint Plans and Transformation Department, and Fleet Commander. Beyond the SAF, he also served as Director of the Research & Enterprise Division in the Ministry of Trade & Industry. RADM Lew has held the appointment of Chief of Staff – Naval Staff since August 2016.

The Ministry of Defence expresses its deep appreciation to RADM Lai Chung Han for his distinguished service and sterling contributions to MINDEF and the SAF.