The Republic of Singapore Navy (RSN) celebrated its 50th Navy Day on 5 May 2017. In commemoration of its Golden Jubilee, Prime Minister Lee Hsien Loong launched the RSN50 Commemorative Book and RSN50 Doodle Wall, and sealed the RSN50 Time Capsule to recognise the achievements of its servicemen and women, past and present. The RSN50 Commemorative Book is titled "A Maritime Force for a Maritime Nation - Celebrating 50 Years of the Navy" and comprises a collection of more than 50 articles. It includes articles written by academics and diplomats, feature stories about the RSN’s 3rd Generation transformation, and interviews with RSN personnel such as pioneers, NSmen and current servicemen and women. The book tells the history of the RSN through the adventures of its people, and pays tribute to their hard work and dedication in building a well-balanced and capable maritime force that stands ready, strong and committed in the defence of Singapore. The book will be distributed to all in-service RSN personnel, Navy pioneers and NSmen, as well as Navy personnel from the SAF Volunteer Corps.

Based on the RSN50 theme"Maritime Nation, Maritime Force", the RSN50 Doodle Wall is an art mural depicting Singapore’s rich maritime heritage and key milestones in the RSN’s history. It traces the evolution of the RSN alongside Singapore’s growth as a maritime nation, and reaffirms the RSN's commitment as the unwavering pillar of Singapore’s maritime defence.

The mural was launched by PM Lee, who was the first to colour on the RSN50 Doodle Wall. PM Lee coloured the crescent moon on the valour at sea statue on the doodle wall in gold.

The artwork will also be displayed at SAFRA Punggol and SAFRA Toa Payoh during the June holidays for the public to colour on. 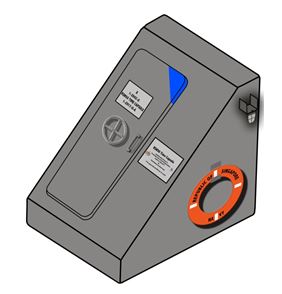 The RSN50 Time Capsule contains items representative of the Navy's key achievements over the past 50 years, contributed by the RSN's various formations and departments. This includes achievements in naval diplomacy, deployment structure and engineering and logistics capabilities. Former Chiefs of Navy also contributed items that reflect a key milestone of the RSN during their tenure. The time capsule was sealed by PM Lee, who also placed the RSN50 Commemorative Book inside.

Other items include a framed poster of the ports-of-call during Sail Navy 2000, the RSN's first round-the-world voyage; a replica of the new littoral mission vessel, signifying the capability of the future RSN; and aspirations of our Navy personnel for RSN75.

The time capsule will be opened when the RSN turns 75 in 2042. It is specially designed to look like a typical compartment on board an RSN ship. Like how a watertight door maintains a ship's watertight integrity, this time capsule is meant to preserve the integrity and timelessness of the artefacts sealed within.