The Chiefs of Navy of Indonesia, Singapore and Thailand, Malaysia's Deputy Chief of Navy, and Singapore's Chief of Defence Force linking arms in a gesture of cooperation at the Malacca Straits Patrol 10th Anniversary Commemorative Events. 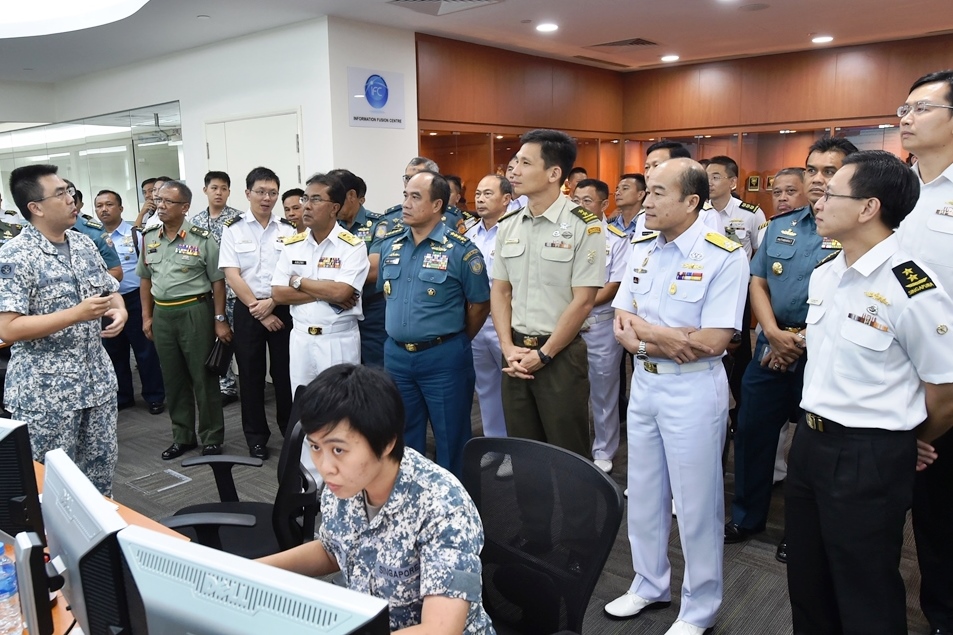 The Chiefs of Navy of Indonesia, Singapore and Thailand, Malaysia's Deputy Chief of Navy, and Singapore's Chief of Defence Force observing the MSP exercise at the Information Fusion Centre.

The Chiefs of Navy of Indonesia, Singapore and Thailand, and Malaysia's Deputy Chief of Navy gathered today at the Changi Command and Control Centre at Changi Naval Base for the Malacca Straits Patrol (MSP) 10th Anniversary Commemorative Events to mark a decade since the signing of the MSP Terms of Reference and Standard Operating Procedures on 21 April 2006. The MSP is a set of cooperative measures comprising the Malacca Straits Sea Patrol, the "Eyes-in-the-Sky" Combined Maritime Air Patrols as well as the Intelligence Exchange Group, that are undertaken by the littoral states to ensure the security of the Straits of Malacca and Singapore (SOMS).

The MSP initiative has been successful in improving maritime security in the SOMS. Following its inauguration, the Lloyd's Joint War Risk Committee dropped the classification of the Malacca Strait as a \"war-risk area\" in Aug 2006. In conjunction with the Commemorative Events, the four MSP members engaged in discussions on measures to address sea robbery hotspots at the approaches of the Singapore Strait, how they can strengthen cooperation and coordination, and reaffirmed their commitment towards enhancing the effectiveness of the MSP to address these hotspots.

Speech by Chief of Defence Force Major-General Perry Lim, at the 10th Anniversary of the Malacca Straits Patrol