Minister for Defence Dr Ng Eng Hen (centre) accompanied by Minister of State for Defence Dr Mohamad Maliki Bin Osman (2nd from right), unveiling a plaque to commemorate the achievement of FOC by the F-15SG. 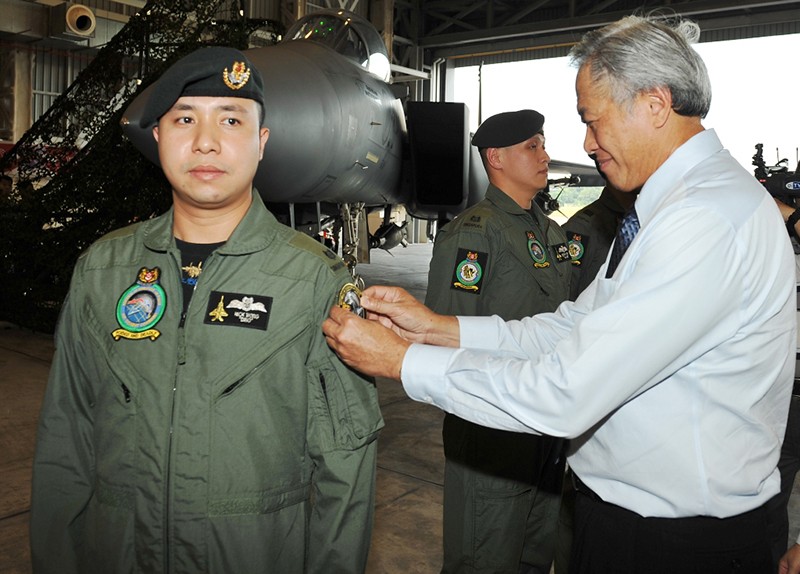 Dr Ng receiving a brief on the capabilities of the F-15SG from MAJ Nick Wong inside the cockpit of the aircraft.

Minister for Defence Dr Ng Eng Hen officiated at a ceremony to mark the achievement of Full Operational Capability (FOC) status by the Republic of Singapore Air Force's (RSAF) F-15SG multi-role fighter aircraft at Paya Lebar Air Base this afternoon.

Speaking at the ceremony, Dr Ng highlighted the significance of this milestone to the overall enhancement of Singapore's air defence capabilities and also emphasised the importance of having a strong RSAF. He said, "The RSAF's F-15SGs have been rigorously tested and proven superior in air defence and strike capabilities, and integrated with other air platforms within the RSAF, which together are able to respond to a spectrum of threats to defend and dominate our skies. A strong RSAF provides confidence that Singapore is well capable of defending its sovereignty and protecting our precious homeland."

The F-15SG is operated by 149 Squadron locally and the RSAF's Peace Carvin V (PC V) Detachment at Mountain Home Air Force Base in the United States. It is one of the most advanced variants of the F-15 strike aircraft which has a distinguished combat record of over 100 kills to 0 losses. The F-15SG is equipped with state-of-the-art avionics, a sophisticated integrated sensor suite and network capabilities, which help enhance the RSAF's battlefield awareness. Along with its superior firepower and combat endurance, the aircraft provides the Singapore Armed Forces (SAF) with enhanced air defence and air superiority capabilities. After taking delivery of the aircraft in May 2009, the F-15SG pilots, weapon systems officers and maintenance crew have undergone intensive training to operate and maintain the aircraft, as well as to integrate the aircraft to support the SAF's operations. During this period, the F-15SGs have also participated in major exercises such as Exercise Forging Sabre, Exercise Cope Tiger, Exercise Pitch Black, Exercise Bersama Shield and Exercise Red Flag. 149 squadron, which began operating the F-15SG in 2010, also won the RSAF's Best Fighter Squadron award in 2011 and 2013.

Speech by Minister for Defence, Dr Ng Eng Hen, at the Ceremony to Mark the Full Operational Capability of the F-15SG