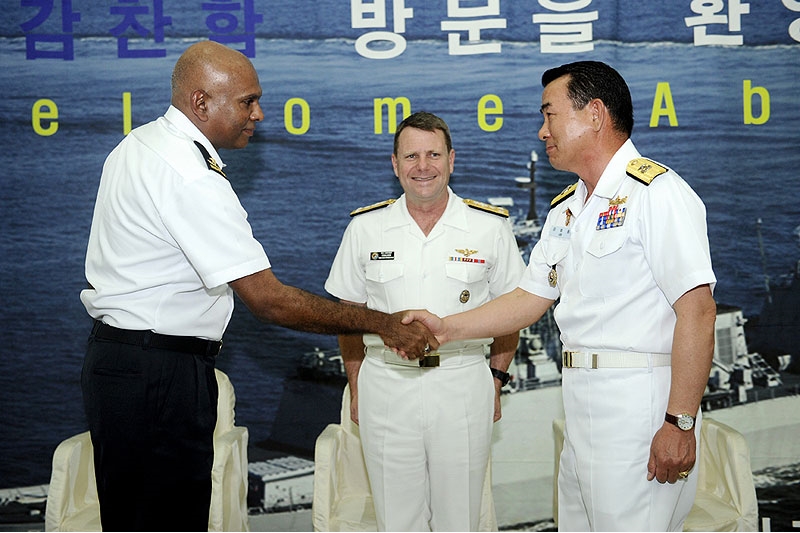 RADM Bernard Miranda handing over command of CTF 151 to RADM Lee Beom-Rim at the ceremony, with VADM William E. Gortney as witnessing officer. 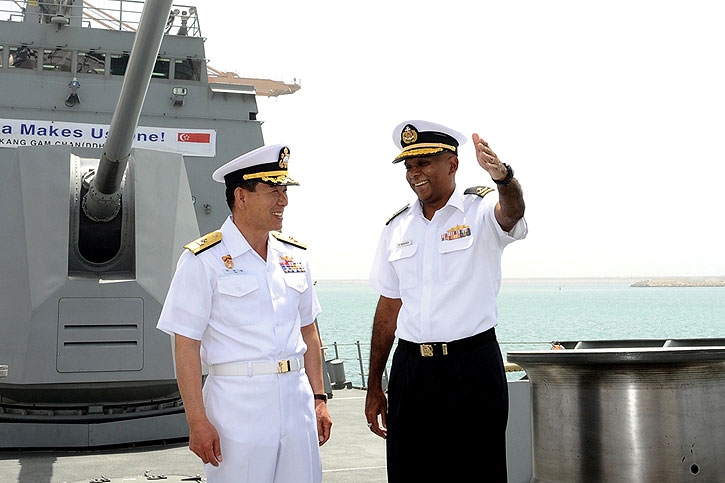 Singapore has successfully completed its three-month command of the multinational Combined Task Force (CTF) 151, as part of the international counter-piracy efforts in the Gulf of Aden (GoA). Led by Rear-Admiral (RADM) Bernard Miranda from the Republic of Singapore Navy (RSN), the CTF 151 command team and liaison officers, comprising 29 Singaporeans and six personnel from the navies of Australia, France, New Zealand, the Republic of Korea and Saudi Arabia, coordinated counter-piracy operations by CTF 151 to deter and disrupt piracy in the GoA. The CTF 151 command team and liaison officers also coordinated counter-piracy operations with naval forces from the European Union, North Atlantic Treaty Organisation, as well as with navies from other countries.

RADM Miranda handed over command of CTF 151 to RADM Lee Beom-Rim from the Republic of Korea Navy (ROKN) in a ceremony held on board the ROKN destroyer, ROKS Kang Gam Chan, this morning. RADM Miranda reiterated the importance of multinational counter-piracy efforts such as that of the CTF 151 in ensuring the safety and security of the GoA. He said, "The coalition has made good progress in the counter-piracy operations in the Gulf of Aden and Somali Basin. The task force command team and liaison officers, as well as the ships from all participating navies worked well together to disrupt pirate attacks." Commending Singapore on its leadership of the task force, Vice-Admiral (VADM) William E. Gortney, Commander Combined Maritime Forces (CMF), said, "Whether coordinating the efforts of Coalition vessels, deploying boarding teams to suspicious vessels, or educating commercial mariners on best management practices, RADM Miranda's team has consistently been the driving force behind these measures of effectiveness and has raised the bar for future task force commanders. I commend you and your team and thank the Republic of Singapore for providing the CMF with your leadership."

During the RSN's command of CTF 151, the task force responded to calls for assistance and coordinated efforts to successfully thwart pirate attacks. As part of efforts to enhance cooperation, the CTF 151 command team and liaison officers also established a Shore Coordination Team at the US Naval Support Activity in Bahrain, for better coordination of activities and information exchange with its partner navies operating in the GoA.

The Singapore Armed Forces deployed a task group comprising an RSN Landing Ship Tank (LST), RSS Persistence, with two Super Puma helicopters on board, to support the international counter-piracy efforts in the GoA from April to July 2009. A second task group comprising an LST with two Super Puma helicopters on board will be deployed from June to October this year and a Fokker 50 Maritime Patrol Aircraft will be deployed later this year to assist in surveillance operations in the GoA.