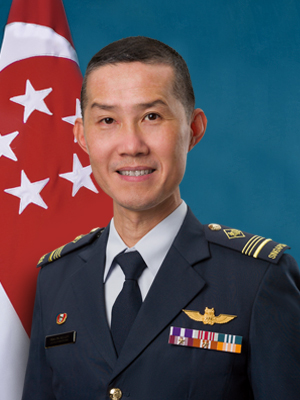 Military Expert 6 (ME6) Ng See Lye joined the Republic of Singapore Air Force (RSAF) on 10th April 1987 and started his RSAF journey with the F-16A/B under the Fuel System Flight. He was subsequently trained and qualified to maintain the F-16C/D and the F-15SG as an Aerosystems Specialist.

ME6 Ng was awarded the Continuous Learning and Academic Sponsorship Scheme in 2006 and graduated with Merit attaining an Advanced Diploma in Aerospace Engineering and Management. In 2014, he graduated from Embry-Riddle Aeronautical University with a Bachelor of Science in Aeronautics (Magna Cum Laude), and was the recipient of the Sword of Honour during the 7th Senior Military Expert Appointment Ceremony. In 2017, he was a Distinguished Graduate at the 45th Tri-Service Warfighter Course. ME6 Ng graduated from the 10th CSC (Executive) course at the Goh Keng Swee Command and Staff College in 2018 with a Book Prize. ME6 Ng also attended the RSAF Advanced Command Chief Programme, USAF Pacific Air Forces Chief Master Sergeant Leadership Course and Singapore Armed Forces Joint Senior Leadership Course.

ME6 Ng and his wife, Valerie Tan, have a daughter, Natasha.