"To be able to make friends with people from another country, and connect with them, has been the most amazing factor of Tiger Balm 2019", reflected one of the exercise participants of Exercise Tiger Balm (XTiB) 2019.

As the 40th anniversary of XTiB dawns upon us next year, the warmth shown towards each other from both sets of soldiers was evident in almost everything. From casual conversations filled with jokes and laughter to completing missions with cooperativeness and efficiency, this exercise had been a demonstration of brotherhood and relations.

Following the ceremony, the US troops were able to get a hands-on feel of the Singapore Assault Rifle - 21st Century (SAR-21), as well as to try out a variety of different Urban Operations Capability Enhancement (UOCE) equipment used in the Singapore Army at a static display session. 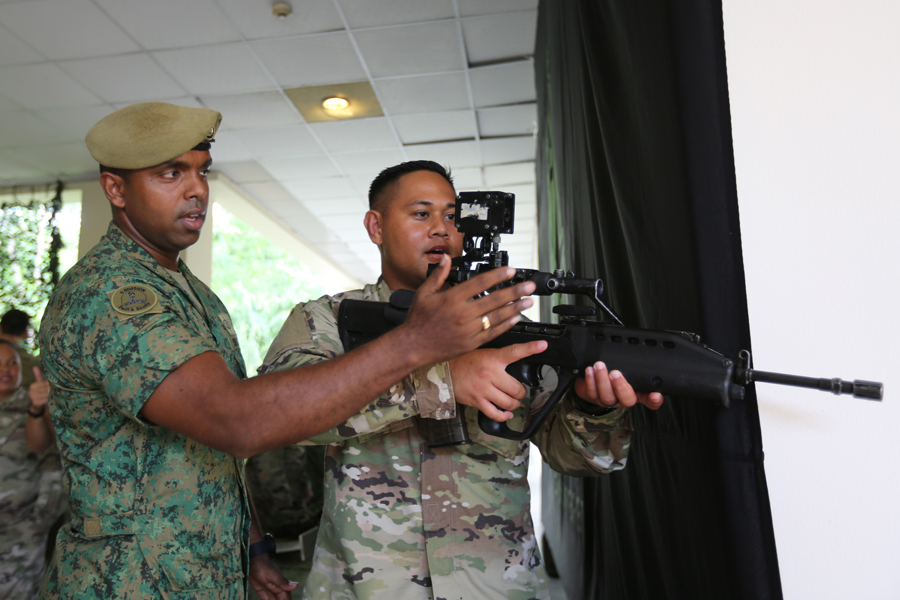 A US soldier getting a feel of the SAR-21. Our soldiers showing the Controller Display System for the Tactical Throwing System to a US soldier.

For the US troops to get a full feel of the SAR-21, our soldiers and the US troops headed down to the Multi-Mission Range Complex (MMRC) for a live-firing session. There, the US soldiers completed a day and night shoot, guided by our soldiers who constantly gave tips on how to improve the handling of weapon and accuracy. Our soldier guiding the US soldier on the use of SAR-21 during the live-firing session in the MMRC.

The interaction continued with our soldiers using the M4 Carbine Assault Rifle, the standard-issue rifle for the US troops. Their troops guided our soldiers in using the rifle during the day and night shoots and both sets of soldiers enjoyed exchanging helpful information and tips, as well as friendly banter about which set of soldiers achieved better results. One of the US soldiers giving tips to our soldiers during their live shoot with the M4 Carbine Assault Rifle.

Paddles then graced the waters of Marina Bay as our soldiers and their US counterparts headed out for a session of Dragon Boating. After learning the basics of steering and paddling, two teams made up of combined SAF and US troops were formed and they rowed along the waters of the Marina Bay area, ending it off with a friendly 200-meter race. It was a fruitful day as soldiers from both countries bonded, and their laughter punctuated the air of the warm Singapore sun. 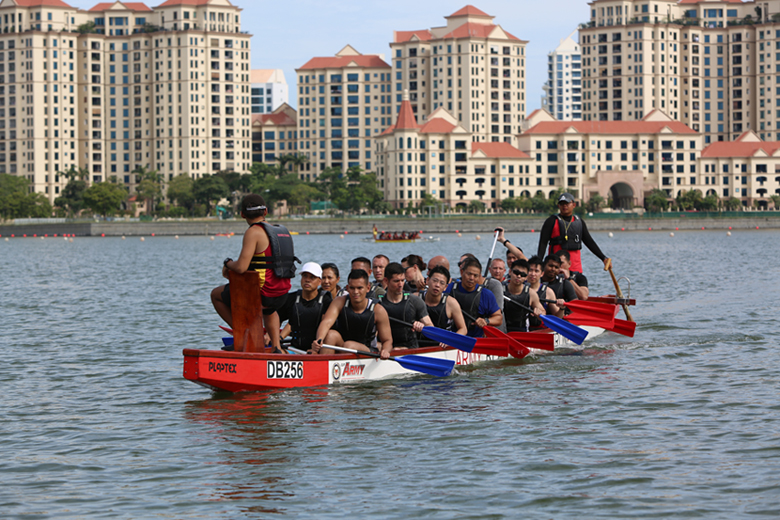 A combined Dragon Boat team of SAF and US troops after a short 200-meter race.

The following week, the US soldiers were brought to Pasir Laba Camp, where our soldiers demonstrated Basic Jungle Survival skills to them. The troops were shown how to differentiate and test a plethora of plants and berries in the jungle for edibility, as well as how to catch, kill and cook different kinds of animals native to the Singapore rainforest. They were also taught survival skills essential in the jungle, ranging from water filtration to making a fire and setting up a shelter. The experience was especially enriching to the US troops as a rainforest environment was something foreign to most of them. 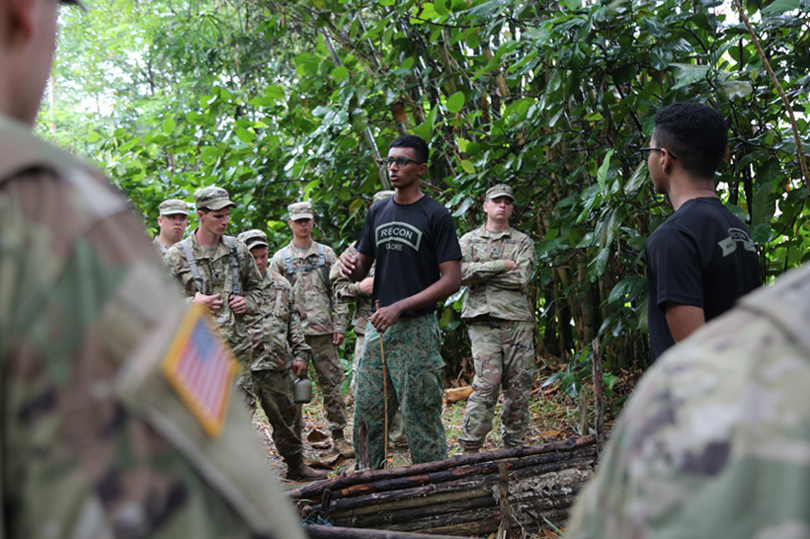 One of our soldiers sharing different survival tips and tricks in the jungle with the US soldiers. 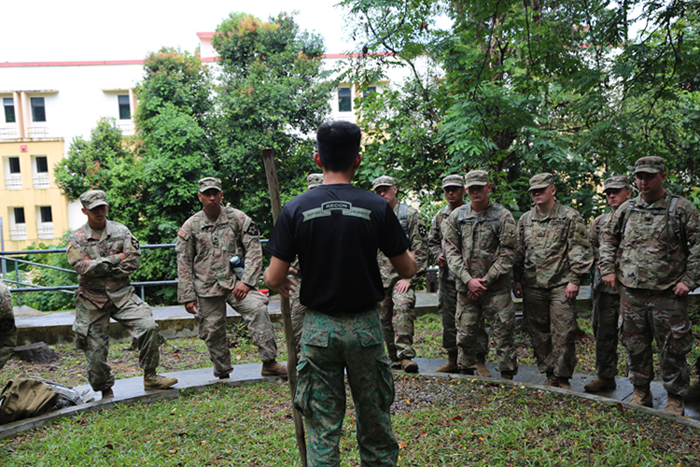 Whilst there was a healthy amount of interaction and leisure during the past two weeks, everything boiled down to the final exercise - the Summary Exercise (SUMMEX). A combined task force of our soldiers in our Terrex Infantry Carrier Vehicles and the US troops in their Stryker vehicles rolled into Murai Urban Training Facility (MUTF), where the sole objective was to seize control of key buildings and neutralise the opposing forces within. The air exploded with the sounds of gunfire as smoke from smoke grenades crept over the land. The camaraderie between our soldiers and the US troops was evident in how smoothly the combined task force cleared building after building, moving together, leaving no man behind. US troops clearing the building. As the fighting stopped, a new task was brought up: to handle a simulated explosive device found in one of the buildings in the area. For the very first time, an integrated Explosive Ordnance Disposal (EOD) team from the Singapore Army's 36th Battalion Singapore Combat Engineers and the US Army's 303rd EOD Battalion worked together and tackled the situation, with both sets of soldiers working in unison to neutralise the threat.

With the final mission concluded, XTiB 2019 had officially come to an end, and it was time to say goodbye. Commander 6 Div, BG Lee Yi-Jin, commended both sets of soldiers for their professionalism shown throughout the exercise.

We also had the opportunity to speak to a few exercise participants about their thoughts on working with the US soldiers and one of the important takeaways from a bilateral exercise like XTiB 2019 was to learn from each other.

For CPT (NS) Norazim Jukri, Deputy S4 from 76 SIB, the commitment of the US soldiers was what impressed him the most when working with them.

"In Singapore, there are people like us, NSmen, where we come back for maybe a week or two in a year to refresh and do our duties in the Army. For the Americans however, they have this thing called the National Guard, where whilst holding your normal job, you train and operate as a soldier a few times a week or month, and it requires quite a lot of commitment. Knowing that it is completely voluntary really impressed me." 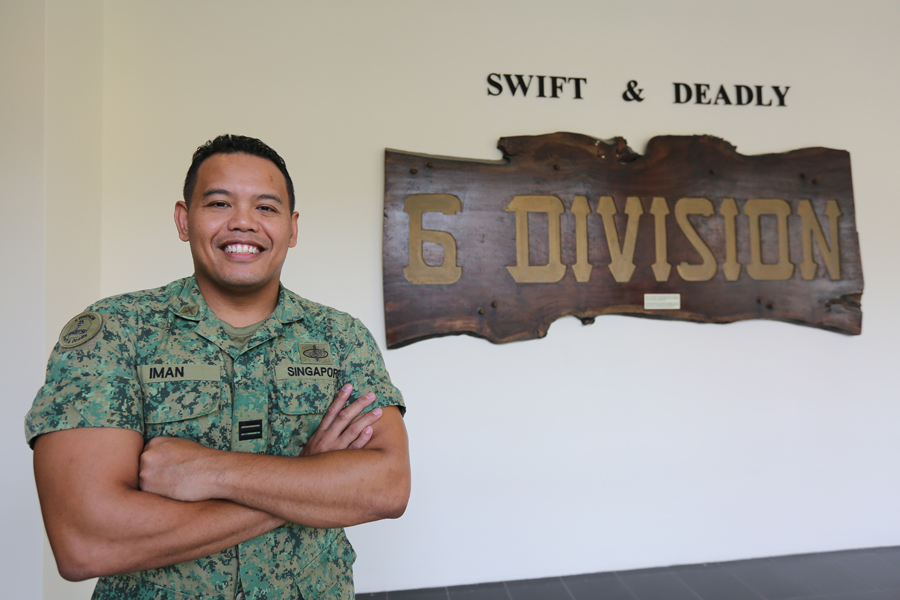 For SSG (NS) Wang Kangwei Marvin from Fire Support Section, 76 SIB, the key to working with the US troops lies in staying focus on the task ahead and being professional.

"I think there's no secret in working with an Army from another country. Just focus on the mission at hand, and stay focused." 3SG Muhammad Rifai Akmal Bin Taufix Effendy, Section Commander, 5 SIR, shared that he enjoyed the exchange with the US soldiers. When asked about what the US soldiers might have learnt from us, 3SG Rifai says that whilst the Americans adapt well, the SAF plans well too.

"They adapt well to whatever situation they are in, but for us, we always have a set of contingency for every situation, and we always plan for whatever emergencies that may befall us." Despite not having the opportunity to work directly with the US troops, 3SG Muhammad Danial Bin Mazlan, Platoon Sergeant, 5 SIR, relished the opportunity given to participate in the planning behind the exercise.

"I was in taskforce planning, so I didn’t have the chance to work directly with the US troops. Despite so, the reason why I was able to focus well on my planning was partly due to my fellow team members. We also appreciated how cooperative the US soldiers were, and I'm thankful to them for that." As mentioned by Commander 6 Div, BG Lee Yi-Jin, in his speech during the closing ceremony, "I want to thank and congratulate all of you for a job well done, and for the soldiers, I will commend you for your professionalism shown throughout the exercise. To all our US friends, I sincerely hope you have enjoyed your time here with us."

Watch the exercise come 'alive' in our Facebook video here! 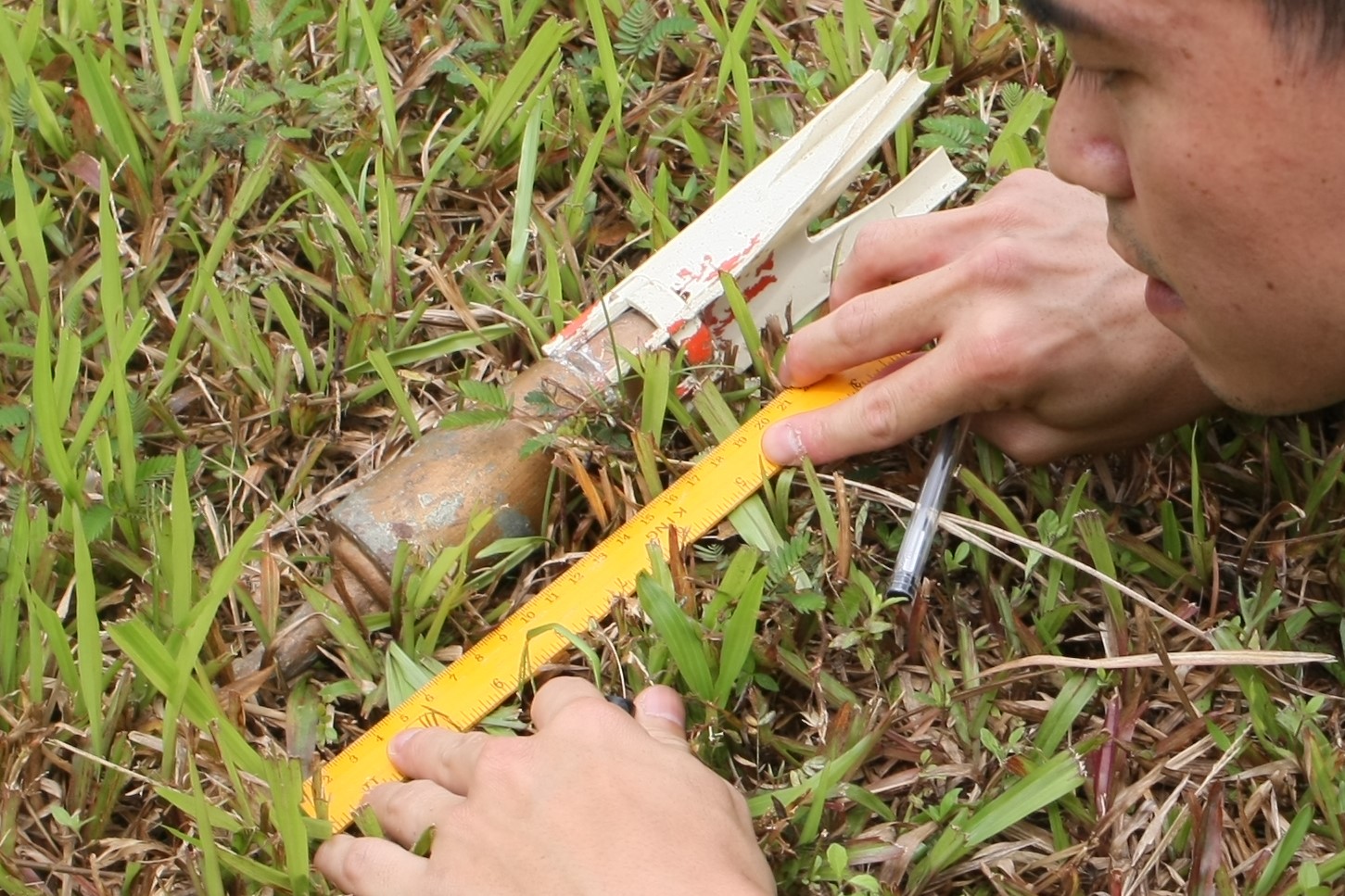