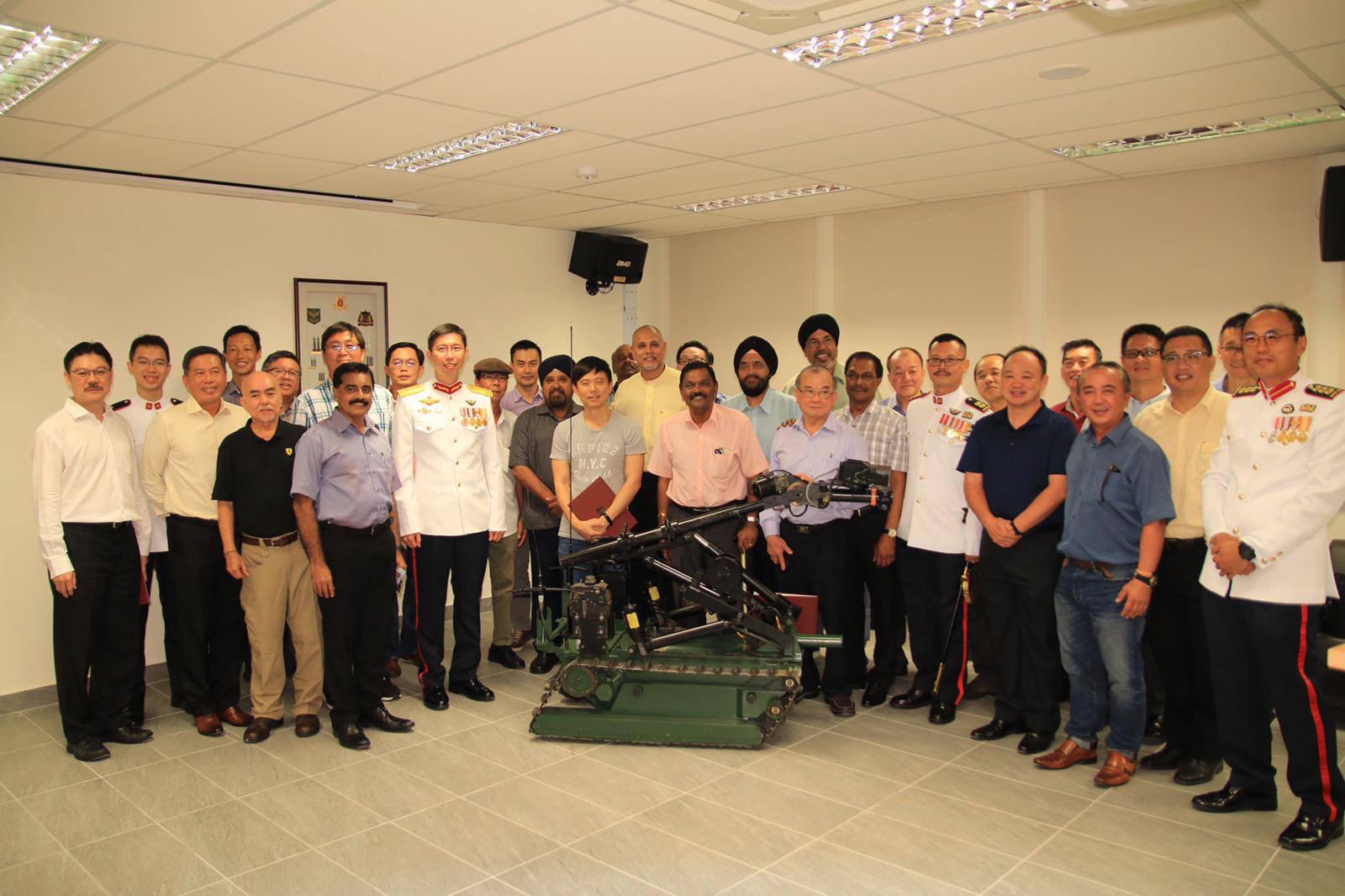 BACK
EOD 50: 50 Years of Mission Success - Towards the Next Lap of Perfection
Events

What started as a team of six with the mission of keeping their nation safe from bomb threats transformed into a 50-year-old world-class Explosive Ordnance Disposal (EOD) unit constantly contributing to Singapore's security through both local and overseas operations. The EOD unit, also known as the 36th Battalion, Singapore Combat Engineers (36 SCE), performs the critical role to respond to any explosive ordnance, and performs security sweeps for key national events like the National Day Parade (NDP).

The EOD story began with the impending departure of the British Army, post-independence. Then, the Singapore Armed Forces (SAF) needed to address our operational gaps in a critical domain – to neutralise EOD and Improvised Explosive Device (IED) threats. However, setting up the unit was not an easy task. The unit started with six pioneers, four of whom were still officer cadets then! All six of them were sent to the 443rd British Ammunition Depot in Kranji Camp to be trained in field clearance operations, and on the 16th June 1969, they set up what was then known as the SAF Bomb Disposal Unit (BDU). From then, a journey of operational excellence, courage and professionalism, began. The Activations
The work began almost immediately. On their inauguration day, the unit received their first mission – three-inch mortar bombs were found in Queenstown. The team was deployed quickly and disposed the bombs safely. However, the work did not stop there. In the first six months after the unit's formation, they were activated 86 times to deal with both war relics and IEDs. Despite a tough beginning, the pioneers persevered and overcame the challenges they faced. This resilience eventually laid the foundation on which the unit stands today.

First Overseas Activation
In 1978, at the height of the conflict between Bangladesh and Pakistan, the unit undertook its first overseas mission at the request of Bangladesh. There was a need to dispose a 500lbs aerial bomb armed and fuzed with a tail pistol. The team comprising three members, including then-Commanding Officer (CO), CPT Wong Kum Kay, LTA Govindasamy, and 2WO John Williams, was formed and tasked with this mission. Since then, the unit has supported both local and overseas operations.

Clearance Projects
Other than being the national responder for all EOD and IED threats, 36 SCE has also played a unique role in our nation's urban development. Many of the EOD veterans have been involved in the operations as we cleared or reclaimed land, or dug underground to build the infrastructure that shaped the Singapore we know today.  One notable project was the East Coast Park Unexploded Ordnance (UXO) Clearance Project. Being one of the largest operations that the unit has conducted till date, the clearance project stretched over a period of more than three months in 1989 and the unit cleared an area spanning 12km by 400m. Different types of UXOs were uncovered, including small arms ammunition, rockets and aerial bombs, and over 55,000 ordnances were found and disposed. EOD teams posing with the rows of protective works prepared for the disposal.

Celebrating the past, looking towards the future
Fast forward to 28 Jun 2019, 36 SCE celebrated their unit's Golden Jubilee at Nee Soon Camp, Home of the EOD Engineers. Members of the 36 SCE, past and present, gathered together to commemorate its 50th birthday with a parade. We had an opportunity to speak to the founding pioneers and other servicemen from EOD to hear their stories! CPT(Ret) Wong Kum Kay is one of the first six pioneers who were sent to the 443rd British Ammunition Depot in Kranji Camp to be trained in field clearance operations. Before CPT (Ret) Wong became the CO, he was working with his team to deal with EOD and IED threats. He shared that the most challenging times were during the 1960s to 1970s where the Malayan Communist Party Bombing Campaign and the Palestine Liberation Organisation (PLO) letter bombs posed great threats to the safety of Singaporeans. Aftermath of a blast at Still Road during the Malayan Communist Party Bombing Campaign.

"I remember we had a lot of letter bombs from the PLO at that time. They were also sending bombs overseas from Singapore. Our main priority then was to make sure we neutralised the situation and that no one was hurt in the process." he shared.

In 1977, CPT (Ret) Wong was then tasked a clearance project named Project Changi 5/77, where the unit issued operation orders and briefings to the Platoon Commanders for the field clearance of UXOs at Changi Air Base. Due to the hazards posed by mechanical excavators, the excavation had to be done manually. In just a week, 355 ordnance and 2900 ammunition rounds were found. For 1WO (Ret) Ramachandran Nair, another pioneer of 36 SCE, his journey started when he applied for the Bomb Disposal Course in Dec 1976. Witnessing how the unit has grown over the years, he shared that there were many technological advances which have increased the effectiveness of the unit. Despite the changes, the only one constant was the heart of the soldiers, which remain ever vigilant and ready for any situation. Looking back, 1WO Nair shared with us how he disposed a war relic during one of his many activations in service. "In 1986, I was activated for a bomb call. I was on duty and was activated to respond to a war relic activation at Changi. On arrival at site, I carried out my reconnaissance and concluded that the relic was a six-inch shell with a Point Initiating Base Detonating fuze intact. After assessment, I decided to blow the relic on site. A pit of six metres deep was dug, the ordnance placed inside and covered with sandbags. After the detonation, I inspected the pit to confirm that it was destroyed." Reflecting on the unit's milestone, 3WO Victor Er, currently serving as Platoon Warrant Officer, Platoon 2, reflected that the strong ties built within the unit is what contributed to its success for so many years.

"The EOD community is like a family. We have built strong trust in each other and are always willing to help one another in our tasks. Every one of us strongly believes in passing down our knowledge to the next generation. It is this never-ending journey of learning that allows us to succeed in every mission we are given." For MSG Shawn Chiang, an EOD Commander, joining the unit fulfilled a childhood dream he always had after witnessing how interesting his father's military career in 36 SCE was. When asked about how he felt when he learnt that his son followed in his footsteps, MAJ (Ret) Chiang Kip Tuck, who had served in the unit back in the 1980s, shared that he "felt extremely proud".

Upon reflecting on his experiences in the unit thus far, MSG Chiang finds that his first UXO disposal to be one filled with excitement and anxiety. "At that time, it was my first encounter with an UXO. During then, I was nervous and excited at the same time. However, with the training that prepared me beforehand, I managed to keep calm and assisted my team commander in successfully disposing the UXO. It was indeed a memorable experience for me." MSG Shawn Chiang (left) an EOD Commander together with his father, MAJ (Ret) Chiang Kip Tuck (right) who served in 36 SCE in the 1980s.

An NSmen of 28 years, 3WO (NS) Pock Hong Peng continues to serve his national duty with pride, completing each task and mission effectively and efficiently, with the self-added responsibility of motivating younger generations of NSmen.

"It always feels rewarding if I can still contribute to Singapore in any given capacity. When I don on my uniform to report for national duty and/or In-Camp Training, I feel a strong sense of duty to do my part in defending Singapore. I also hope to set a good example and inspire my kids (a 7-year-old son and 13-year-old daughter), as well as the younger generations of NS EOD commanders." From handling simple UXO to responding to a full spectrum of EOD and IED threats, 36 SCE has came a long way over the past 50 years. The unit has successfully responded to more than 3,500 EOD and IED activations, staying operationally ready since Day 1. The Army would like to thank every member of the 36 SCE, past and present, for their commitment and sacrifices. We are also confident that commanders and men of 36 SCE will continue to uphold these high standards, and safeguard the security of Singapore and the safety of Singaporeans for many years to come.