"Exercise Cooperation is one of the cornerstones of our strong bilateral defence ties and defence relations between our two countries," said Commander 3rd Singapore Division, Brigadier-General (BG) Frederick Choo at the opening ceremony of the exercise. Besides sharing operational experiences, one key highlight of Exercise Cooperation is the cultural exchange and deep friendships forged that took place along the way.

In Exercise Cooperation 19, troops from our 1st Commando Battalion trained alongside the People's Liberation Army (PLA) Southern Theater Command Army's 74th Army Group. First conducted in 2009, Exercise Cooperation underscores the close and long-standing defence ties between both forces and serves to enhance the collaboration across a spectrum of operations including counter-terrorism.

In the fourth iteration of Exercise Cooperation, held between 27 Jul to 5 Aug, we saw the soldiers working seamlessly together as they trained side by side. This year's exercise included professional exchanges and component training such as rappelling, weapon handling, basic demolition and close quarter battle techniques before culminating in a simultaneous urban raid.

The exercise started with an iconic Commando Challenge where mixed teams of SAF and PLA soldiers competed against one another on who can complete a series of stations the quickest. The stations included tyre flips, sandbag lifts and kettlebell swings. The time spent together helped to set the foundation for strong friendships.

As part of the bilateral exercise, a Professional Exchange was organised to allow cross sharing between the soldiers to learn and experience one another's weapons and equipment. On top of providing a hands-on feel of the Singapore Assault Rifle - 21st Century (SAR-21), our Commandos exhibited their wide array of demolition equipment and the many gadgets used in urban operations such as the Tactical Throwing Sensor and the Forward Sensor System.

A PLA soldier getting a feel of the SAR-21.

With the final mission exercise in mind, exercise participants underwent Urban Operation training (UO), brushing up on their UO and room-clearing drills, as ensuring coordination within each team was paramount. Both forces were able to share their methods of room-clearing, and exchanged tips on how they could further improve on their manoeuvres. Following the drills, the soldiers were brought to SAF's Multi-Mission Range Complex (MMRC) for Urban Operation live-firing, where soldiers practiced what they have learnt as they completed various mock-up situations. This live-firing session was an opportunity for our Commandos to enhance their effectiveness with the PLA soldiers as they work in separate groups to achieve a common objective.

Aiming to improve the interoperability of our Commandos with the PLA, the troops concluded the exercise on a high note with their final mission exercise at Murai Urban Training Facility (MUTF). The Field Training Exercise saw a task force of three teams from both armies conducting an urban raid on an enemy hideout. The objective was to simultaneously assault the building, neutralise the threat and rescue the hostages – a task easier said than done.

Our soldiers rappelling down to the third floor, before their assault.

Our soldiers utilising a keyhole sensor to gain situation awareness before their simultaneous assault.

As part of a peacekeeping task force, troops from both forces stealthily approached the building before setting off demolition charges to force entry into the three-storey building, whilst others rappelling down from the rooftop. Forces then stormed into the building utilising room clearing tactics as well as close quarter battle techniques to neutralise threats. Shortly after, two SAF Peacekeeper Protected Response Vehicles (PRV) arrived to form a protective cordon and then evacuated civilians from the building.

Our soldiers evacuating a casualty.

SAF and PLA troops exiting the SAF Peacekeeper PRV to provide cordon and security support during the exercise.

At the final mission, the troops put together different competencies that they had sharpened during their training phase to good use and practiced clear communications between both sides. The well-coordinated and precisely executed operation served as a testament to the professionalism and competence of the SAF and PLA troops. It also demonstrated our seamless cooperation with a high level of understanding, trust and camaraderie forged between both forces.

Here are some thoughts from some of our exercise participants on working with the PLA soldiers.

CPL Sam Guan Ting, a trooper from the 1st Commando Battalion, shared that he enjoyed the exchanges with the PLA troopers, not only was he able to learn more about the PLA soldier but was able to share his own experience too.

"I think it is a wonderful and rare opportunity for us to work with a foreign nation. It was very enjoyable being able to handle their weapons and learn how they operate with their equipment. I also found it interesting to find out how life for them is as a PLA trooper while I felt honoured to be able to share our way of life as a Singaporean son."

CPL Looi Jia Chek, a trooper, described the exercise as an unforgettable experience. Through the exercise, he understood the value of a bilateral exercise as they enhanced their interoperability and combat readiness.

"Through the training, both armies gave each other tips on how to improve various drills like the UO drills we performed. This exercise was highly beneficial to both armies, which was reflected during our final mission exercise through the clear communications and cooperation we had."

For 3SG Lee Keng Yong Joshua, a Detachment Leader, Exercise Cooperation was as an experience he was grateful to be a part of. Besides improving the cooperation between the two armies, 3SG Joshua also saw it as a means to improve himself.

"I feel immensely blessed because it is not every day that we are given the opportunity to interact with a different battalion, let alone a foreign army. These occasions don't come by every day, exercises like these help me build my character as a person through the interaction with different people, and also allows me to understand the world from a different perspective."

"Exercise Cooperation marks a decade since the inaugural exercise in 2009, held in Guilin, China. The exercise has progressed by leaps and bounds since, keeping pace with the positive momentum of the defence relationship between Singapore and China… The increased scale of the exercise can be seen from both sides sending more troops and the lengthening of the duration of the exercise to increase the training value for our soldiers," were the words said by SAF Chief of Staff-General Staff, BG Kenneth Liow in his closing address.

For the past 10 years, Exercise Cooperation has continued to evolve while serving as a meaningful platform for professional exchanges between our troops, in highly relevant and diverse areas of counter-terrorism, infantry and chemical, biological, radiological and explosive operations. This wide spectrum of operations the exercise had covered demonstrates the close partnership and adaptability of our troops from both sides to cooperate effectively over many different security scenarios.

Watch the exercise come 'alive' in our YouTube video here! 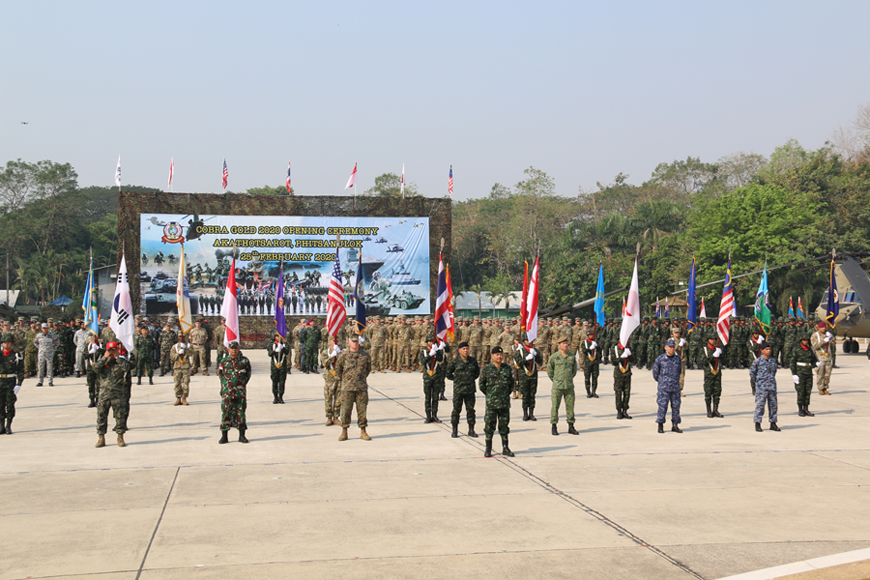 Fulfilling Our Duties In Times of Need
Military Exercises & Ops