BACK
Exercise Daring Warrior 2018 - Our Army getting Fired Up!
Military Exercises & Ops

An explosion resounded through the training field, marking the start of the High Mobility Artillery Rocket System (HIMARS) live-firing exercise, code-named Daring Warrior, at Fort Sill, Oklahoma, USA. The live-firing exercise was conducted from 8 to 25 October, and approximately 150 personnel from the Singapore Armed Forces (SAF) participated in it.

The highlight of the exercise was definitely the combined live-firing exercise conducted by both the United States (US) Army and Singapore Army. This involved HIMARS from both armies engaging a distant target in a mission. Senior Minister of State for Defence, Dr Mohamad Maliki bin Osman, visited the troops and noted that the training in the U.S. provided valuable opportunities for the SAF to hone its capabilities. He said, "This exercise has deepened the professional cooperation and personal linkages between the US Army and the Singapore Army. Participating in the exercise also strengthens our servicemen's operational readiness, as they get to train in a challenging operational environment. The successful conduct of the exercise also exemplifies the competence and professionalism of our SAF servicemen." Soldiers from the US Army and the Singapore Army interacting during the professional exchange. Our soldiers learning more about the US Army's Multiple Launch Rocket Systems. A HIMARS crew, which consists of 3SG Joel Tan Ze An, 3SG Richard Yang Run Ze and CPL Leonard Toh Jia En, shared that this exercise had indeed increased their operational readiness. "Having accomplished what we came here to do during the exercise after numerous months of training in Singapore, we feel that we are now more operationally ready and we look forward to share our experiences with the others back in our unit." The crew was also thankful to have been able to train alongside the US soldiers in the challenging terrain. "The weather and terrain here are very different from Singapore, however as a crew, we managed to adapt and work together to overcome the challenges." 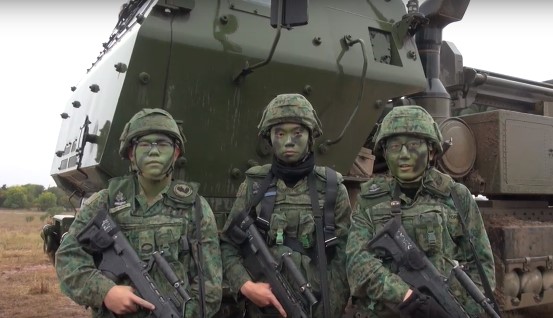 To maintain the serviceability of the HIMARS, a Forward Repair Team (FRT) is always attached to the battery. Being a team of technicians, the FRT provides immediate response to all HIMARS facing technical issues while being deployed out in the field. Speaking to ME2 Gan Soon Heng, a HIMARS technician, he highlighted that "in order to maintain the serviceability of the HIMARS, we are always on standby to repair and recover the HIMARS in the fastest possible time".

The success of this exercise is also attributed to the preparation work done months ahead by the Forward Support Group (FSG). They helped to ensure that all of the logistical requirements and equipment were well taken care of. On top of providing assistance to the troops in orientation driving, these unsung heroes were also in charge of ration and amenities allocation. Having been appointed as the Second-In-Charge (2IC) FSG for the first time, 3WO Tan Swet Hong Serin said that she "had an eye-opening experience as I got to work with various individuals from different backgrounds in the U.S. and Singapore Armies. It was fruitful and meaningful to see that the exercise was completed smoothly".

Conducted since 2010, XDW 18 is the 7th in the series, underscoring the excellent and long-standing defence relationship between the U.S. and Singapore. The strong partnership with the U.S. Army bears testament to the defence ties between the U.S. and Singapore. In addition to bilateral exercises, both armies also engage in a wide range of bilateral activities to foster mutual understanding and enhance interoperability. These include reciprocal visits, professional interactions, and cross-attendance of military courses.